Hanfmann fights Basilashvili for a ticket to the main draw

Two other Germans retire due to injuries

The first day of the qualifying at the 28. NOVENTI OPEN has not caused any favourites to falter but has brought hope looking from a German point of view.  Yannick Hanfmann reached a qualifying final by defeating Frenchman Alexandre Muller in a hard played three-set victory. Hanfmann started weakly, then won 2:6, 6:0, 7:5. It will be tough for him now, though.

His opponent in the qualifying finals is none other than top seeded Georgian Nikoloz Basilashvili. The two-times Hamburg winner and winner of Doha and Munich this year defeated the German talent Rudolf Molleker (20) 7:6(7), 7:6(5). The explosive thing about this game: Basilashvili was coached by German coach Jan de Witt up until the beginning of the year. De Witt now works with Molleker at Halles’ BreakPoint-Base. But the routine of the Georgian showed once more today, even though it was close, in two tie-breaks.

Two other Germans had to give up injured after losing their first sets: Yannik Maden against  Dennis Novak from Austria and Cedrik-Marcel Stebe against Ricardas Berankis from Lithuania. For the Swiss talent Dominic Stricker (18) the qualifying already ended in round one, too. He got into the field via Wildcard and then lost to US-American Marcos Giron in two straight sets.

Latvian Ernests Gulbis, the former top ten player who had reached the semis at the French Open in 2014, was also out of luck. He lost in his opening game to Australian James Duckworth in three sets. The first player to reach the second qualifying round is Belarussian Ilya Ivashka, by the way. It only took him 54 minutes in the morning to defeat Japanese Tatsuma Ito. 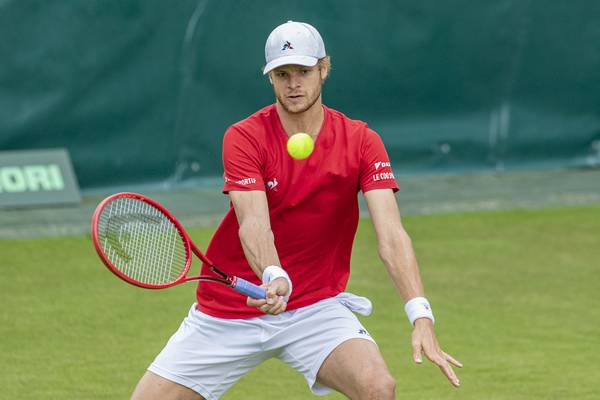