The Georgian goes through to the quarter finals 6:2, 7:5

Nikoloz Basilashvili is picking up speed at the NOVENTI OPEN. The Georgian, who missed the registration deadline and therefore had to start in the qualifying to get to the main field, has now qualified for the quarter final by beating Arthur Rinderknech 6:2, 7:5.

In the duel of the two qualifiers, the Georgian dominated the match on the Centre Court from the start. The 29-year-old took the Frenchman’s service. Arthur Rinderknech was only just able to fend off a second break in his second service. After that, he seemingly had found his rhythm and it looked as though he could achieve a re-break at 2:3. From the Georgian’s point of view the score was 0:40, but he caught up in an outstanding manner. Nikoloz Basilashvili warded off all three break points, won his service and hit the following returns even better. Consequently, the possible 3:3 not only went up to 4:2, but in the next break to 5:2 and then the first set was through after nearly half an hour.

And the Georgian stayed fully concentrated after winning the set. Service, returns, baseline shots – went well for Nikoloz Basilashvili, who is, without question, in this form one of the candidates for the title at the NOVENTI OPEN. But Arthur Rinderknech picked up, too. While making too many mistakes in the first set, his shots were much more stable and overall his service was much better. The Frenchman was now playing more balanced. But still, the duplicity of the events caught up with him. At 5:4 he had two break points, equally meaning set points. Nikoloz Basilashvili, however, warded both off, made it 5:5, to then himself get a break. The match was won by the Georgian four minutes later. 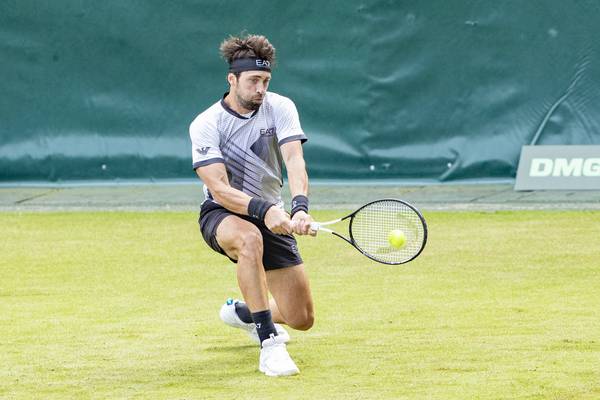