Tournament Director Ralf Weber: “We'll come back even stronger in 2021 – with top-class sports, entertainment and a zest for life.”

Dr. Hermann Sommer, Chief Executive Officer of NOVENTI Health SE: “For us as shapers of the German health care system, health and its protection come first.“

Tennis super star Roger Federer says: “We experience difficult times, however, we will arise from it strengthened. Already today I am glad and excited about my return to Halle the next year. Stay healthy!“

Halle in Westphalia (Germany). Due to the persistent Coronavirus/COVID-19-Pandemic, the 28th NOVENTI OPEN cannot be held in June 2020 as scheduled. After joint consultations of the ATP (Association of Tennis Professionals) with the tournament organisers, today, on Wednesday (1st April) the entire professional tennis grass court season until, including 12th July, the day of the originally scheduled men’s final at Wimbledon, is rescheduled.

“It is an unfortunate step. However, given the current situation, there is no alternative,” explained Ralf Weber, Tournament Director of the NOVENTI OPEN. “We would also like to take this moment to thank all partners, sponsors and helpers for their understanding and their solidarity. We are all looking towards the year 2021 now in which our 28th edition of the tournament will be held.” Germany’s greatest ATP tennis event will then be held at the OWL ARENA in Halle in Westphalia from 12th to 20th June 2021.

Thank you to loyal fans: Raffle for  VIP box seats including access to the VIP area

Tournament Director Ralf Weber already announced that the world-famous ATP 500 grass court event in Halle, the NOVENTI OPEN, will thank its loyal fans with a “Thank you” gift in the coming year. “The success of our tournament is inseparably connected with the many hundreds of thousands of visitors which keep coming to Halle since its very beginning. We have never forgotten that and especially in this depressing situation, we are not going to forget that.” Also for this year’s tournament edition, more than 110,000 spectators were expected, who, apart from world class tennis, would also have been offered a high-class framework programme.

Weber continues: “Our thank you to our loyal fans: Every customer who has already purchased an entrance ticket for the 2020 tournament will receive a five-Euro voucher either on site for the NOVENTI OPEN Fanshop in the coming year or for a selected event at the OWL ARENA or OWL EVENT CENTER, respectively, which can only be redeemed at the OWL ARENA TICKET CENTER or via our online ticket shop - this applies to an event starting from the summer of next year.

Furthermore, in the near future, we will raffle off one day in the “NOVENTI OPEN Thank You Box” via our social media channels for 21 winners plus one accompanying person – two exclusive VIP box seats for the entire tournament week including access to the VIP area.“ “And, it’s only a pleasure deferred,” continues Ralf Weber who also stresses that “also in the coming year our spectators will be presented outstanding ‘tennistainment’ - with tennis superstar Roger Federer leading the way who, as is well known, entered a lifetime contract during his active time as a pro with us. Already today, we have started planning the 28th NOVENTI OPEN. We'll come back even stronger in 2021 - with top-class sports, entertainment and a zest for life!“ And the Swiss Federer says: “We experience difficult times, however, we will arise from it strengthened. Already today I am glad and excited about my return to Halle the next year. Stay healthy!“

Dr. Sven Jansen, Board of Directors of NOVENTI Health SE added. “Already now, we would like to set an example for the NOVENTI OPEN and for Germany as tennis location and therefore already yesterday have extended our three-year contract to the years 2021 to 2023. Also, at the NOVENTI OPEN 2021, we will continue our commitment for a healthy and sustainable tournament - we are already looking forward to it.“

Main sponsor Tennis-Point, the renowned multi-channel retailer from the neighbouring Herzebrock-Clarholz (North Rhine-Westphalia) will remain closely linked to NOVENTI OPEN until 2022. “We would have loved to present our extended offer to all fans this year already,” commiserated Christian Miele, Managing Director of Tennis-Point GmbH and now focusses the planned, intense cooperation to the coming year: “It is now important for everyone in tennis to stick together and, if necessary, direct the perspective towards 2021. As before, our goal is to provide visitors with an extraordinary fan experience.” The company, amongst other things, plans a huge “Tennis-Point Village” with several sales tents around the topic of tennis, as well as to install a court for the trend sport “Padel”.

Sponsoring partners of the OWL ARENA approve of tournament postponement

On 14 January 2020, a new era began in Halle in Westphalia with renaming the stadium to OWL ARENA. The prominent event location in the East Westphalian region was bestowed a new concept which includes up to 16 renowned sponsors from the East Westphalia-Lippe region. “Since then, we have only received positive feedback from all partners and sponsors,” said Managing Director Ralf Weber (OWL Sport & Event GmbH & Co. OHG).

“They all expressed their extraordinary identification with the East Weastphalia-Lippe region and their solidarity with the OWL Arena.” And Managing Director Alexander Hardieck added that “also on the part of our visitors and guests, all reactions were pleasant and appreciative.“

The tickets already purchased for this year’s ATP 500 grass court event, the 28th NOVENTI OPEN in Halle in Westphalia remain valid for the postponed event. The respective ticket holders will be contacted in order to be informed about the details.

You find the ticket prices for the 28th tournament edition of the NOVENTI OPEN on our website. Tickets can be purchased via the ticket hotline +49-(0)5201 81 80, as well as on the internet at www.noventi-open.de; and all eventim-booking agencies. You can reach the OWL ARENA TICKET CENTER via e-mail at karten@owl-arena.de; or at the following address: Weidenstrasse 2 (directly situated at the B68 in the direction of Osnabrueck/Bielefeld) in 33790 Halle in Westphalia (Germany). 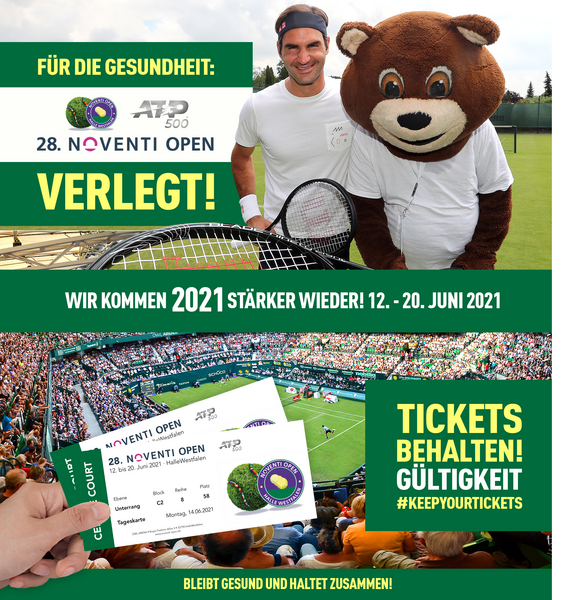