Greek Tennis Star Stefanos Tsitsipas gets the “A+ Wild Card“

The 28. NOVENTI OPEN have further high-class and well-known reinforcement: The current French Open-semi-finalist and worlds‘ number five Stefanos Tsitsipas will start with a so-called “A+ Wild Card“ at Germanys‘ most important ATP-competition, and, thus play for the desired cup for the second time after 2018. “This a real killer, ahead of the first matches, “, tournament director Ralf Weber said. “For the first time in the history of the tournament six top ten players are starting. We are really going to enjoy festive tennis days.” The 22-year-old Greek player gets this Wild Card, „at the last minute, “, belonging to a hand-picked group of ATP 500-Tournament players, Weber stated. “We have had intensive contact for quite a while, because Stefanos wanted to return to Halle after three years.” Thus Tsitsipas, one of the charismatic superstars of the ATP-NextGen, soon could again face some of the opponents from Paris. The ATP-world campion of 2019 had won against Medvedev in the quarterfinals of the French Grand Slam, and thus qualified for his eighth personal duel against the 24-year-old Zverev. “I am looking forward to starting in Halle. In this strong field it is going to be an exciting battle for the title”, Tsitsipas said. The man from Athens, who made his debut in 2018 at the ATP 500 grass event, reached the quarterfinals here. After winning in the first round against French player Lucas Pouille, he lost against the US-American Denis Kudla.

Tsitsipas will take his carrier to a new high after the French Open, thanks to playing a strong season, and displace Austrian Dominic Thiem from fourth place of the ATP-world ratings. The 22-year-old won the Masters tournament in Monte Carlo in 2021, and, last, the competition in Lyon. At the Australian Open at the beginning of this year Tsitsipas reached the semi-finals, and then failed against Medvedev, before that he had defeated Rafael Nadal in a spectacular five-set-thriller in the quarterfinals. The Greek’s further top results were the semi-finals in Acapulco (against Zverev) and in Barcelona (against Nadal). Ahead of the French Open Tsitsipas was even number one of the annual rankings– in front of Novak Djokovic. 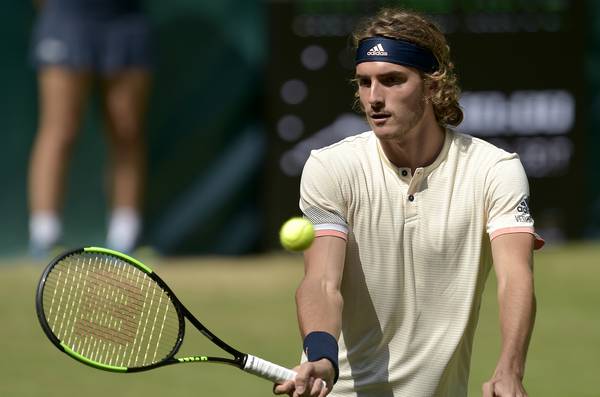 A loaded field of five top-ten players in HalleWestfalen: The 22-year-old Greek Stefanos Tsitsipas, current no. five in the world rakings, receives the so-called “A+ Wild Card,“ for the splendid 28. NOVENTI OPEN. © ATP Halle 2018/KET