The king on the grass has had to get off his throne. Alexander Zverev celebrated his biggest victory in the semis at the GERRY WEBER OPEN 2016! In an exciting and sometimes even dramatic match the 19 year-old high-flyer defeated the world’s No. 3 Roger Federer  7:6 (4), 5:7 and 6:3 and reached his second finals on the ATP World Tour. Federer has missed getting to the finals for the 11th time in Halle/Westfalia.

Showing no nerves at all, on the contrary with a lot of anticipation Alexander Zverev took on this biggest challenge of his carrier. 11.500 spectators in the packed GERRY WEBER STADIUM watched the German play brave and offensive grass tennis against the eight-time GWO champion from Switzerland. If one of the players was able to go into the offensive in longer rallies then mostly it was the young 19 year-old from Hamburg. But there were few opportunities because both served strongly and didn’t give the other a change to get into rallies. Zverev, however, attacked the maestro’s second service well – but in the first set there were no break-points to be seen.

The self-confident performance by Zverev left tracks. Federer, the world’s No. 3 was not quick enough, didn’t build up enough pressure and had three forehand-faults in the following tie-break. Zverev grabbed the tie-Break 7:4 and won a set for the first time in his second match against his big idol. Perhaps this was the first step towards a changing of the guard?

But it wasn’t that far yet. Set two was also a tennis thriller between Zverev and his 15(!) year older opponent. You could feel the tension growing on the ranks as the serves were fought for fiercely. The first two break-points by Zverev at 3:4 were fended off by Federer by acing twice; a game later the German foiled three of the eight-time Halle champion’s break-points. It was nerve-racking, with even Federer throwing his racket after losing his forth break-point.  But then the Swiss player took the opportunity with a smooth stop to score 6:5, the rest was a matter of form. He got his first set-point with the spectators applauding most enthusiastically 7:5

Federer seemed to be adjusting to the local hero’s serve better and was the more aggressive player in this phase of the match. Zverev was astonishingly concentrated and cool. At first the German hope fended off four break chances by the three-time Wimbledon champion early in the third set, and then he used his first chance mercilessly and didn’t show any nerves at all. And so the German Davis Cup player thunder bolted himself in 2.06 hours to the greatest victory in his carrier and will be under the best 30 tennis players of the world on Monday.

For Zverev it was not only a success against his idol, it was also the first victory against a top-ten player. Federer has lost a match ahead of the finals for the first time in 14 years in Halle/Westfalia. It was then also a German, Nicolas Kiefer, who threw him out of the tournament.
“I can’t grasp it at the moment. It is unbelievable to play in front of such an audience. I had two break points in the second set, then he aced twice, though. The key thing was probably that I could fend off four break-points at the beginning of the third set. But I wouldn’t have dreamed that I would be that successful before the match”, Zverev said in a ZDF-interview with Rudi Cerne and was cheered on frenetically by the enthusiastic spectators at the GERRY WEBER STADIUM. 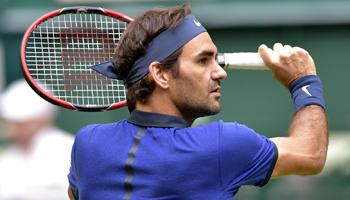 Roger Federer: The king on the grass has had to get off his throne. PHOTO: GERRY WEBER OPEN/KET