Borna Coric has to pull out due to injurie

Pierre-Hugues Herbert through to the semi-finals

After 54 minutes Pierre-Hugues Herbert was through to the semi-finals at the 27th NOVENTI OPEN. His opponent and title-holder Borna Coric had to give up due to injurie after the first set.

The spectators saw an even match on the Centre Court at the beginning. Then Herbert had two chances to go into the lead 4:2, but wasted both. Coric, on the other hand, even had three break points. But the Frenchman had strong nerves, played an ace and fended off the lasting two break chances with strong net attacks.

In total Coric was the better return-player in the first round. The 28-year-old Frenchman was able to come out on top every time thanks to a good service and seven aces.

At a score of 5:4 for Pierre-Hugues Herbert last year’s winner of the tournament in Halle had to be treated. His left side was coursing trouble. The Croatian had already had to put in a treatment pause in the match against Joao Sousa on Wednesday. After a short break he was able to carry on the match this time, too. The following service-game was won by the 22-year-old to love.

The world’s no. 43 from France was able to win another strongly fought game. Then he had three chances to get to set. He used the second – after 54 minutes the set went to Herbert 7:5. Coric wasn’t able to continue the match and had to give up due to injurie. In the round of the last four Herbert will now meet Roger Federer. “I’m in the semi-finals. This is unbelievable,” the Frenchman said after the match. He has never played against Federer before, whom he knows from practise sessions quite well. So it's time to do that. 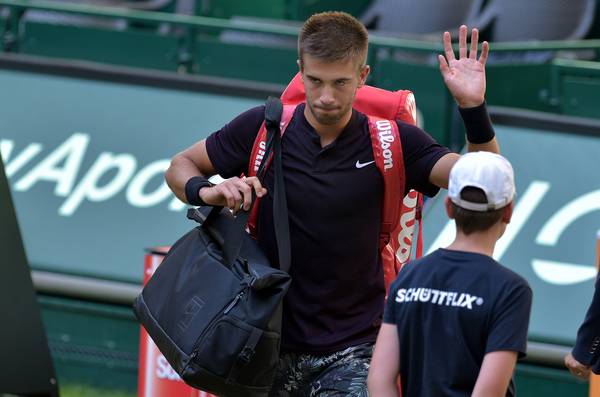 The title-holder at the grass tournament in Halle, Borna Coric, had to pull out after the first set due to injurie. Photo: NOVENTI OPEN/KET