Borna Coric is through to the Finals at the GERRY WEBER OPEN for the first time. The Croatian profited by his opponents' injury, Roberto Bautista Agut. At a score of 3:2 the Spaniard had to give up. Coric is the first Croatian to get to a finals match at the grass court tournament in Halle.

From the beginning onwards the spectators on the Centre Court saw a balanced second Semifinals. Both players started with strong service games. The Spaniard was the more dominant player during the long rallies. Coric had to fend off two break points, before Bautista Agut lunged and injured his left hip. The World's No. 16 was able to end his service game, but was then taken to the dressing room to be treated. After a short break the decision was made, after 23 minutes Bautista Agut was not able to play on. "That's not the way one wants to win. I wish him all the best", the finalist stated after the match.
Coric, who hasn't lost a single set at the 26th GERRY WEBER OPEN yet, will now meet the World's No. 1, Roger Federer. 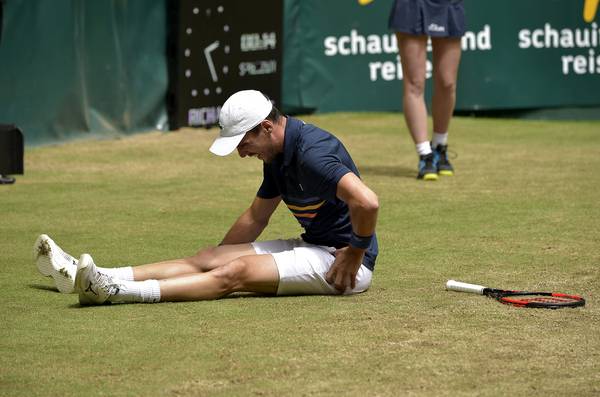 After 23 minutes the Semifinals were through, Roberto Bautista Agut had to give up injured. Photo: GERRY WEBER OPEN/KET