David Goffin (Belgium) is through to the finals at the Noventi Open 2019. With a 7:6(4), 6:3-win the 28-year-old defeated Matteo Berrettini (Italy) who hadn’t been defeated on grass yet this season. “It’s a wonderful feeling to be fit again after my injurie and to now have reached the last match. It was a close match; Matteo was a tough opponent. I was always able to hold against him and am satisfied with my performance“ the Belgian said, who was delighted to reach the finals at the grass tournament in Halle for the first time.

It was a duel of the emotional, greedy, taking a lot of risks Matteo Berretti against the cool, quick, factual acting worker David Goffin. As different the two of them are, they do have one thing in common: both have a strong service as well as strong baseline shots. Because of this an exciting match was to be seen, in which the serving player dominated. There were practically no chances to break. So the first set went into the tie-break, at first with slight advantages for the Italian, who was in the lead 4:3 and a so called mini break. But then the leave turned and David Goffin served and returned greatly earning 4 points in a row and got the first round after 57 minutes.

Up until 4:3, the second set went the same way for David Goffin as the first set before. Then the first break came, however, because the Belgian player was able to read his opponents shots better. At 5:3 David Goffin was therefore serving to win the match. The Belgian ended the match with an ace, winning 7:6(4), 6:3 after 97 minutes. 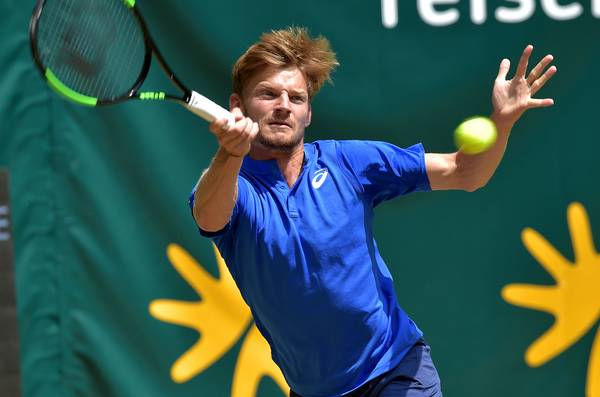 David Goffin reaches the final at the grass tournament in Halle for the first time. Photo: NOVENTI OPEN/KET