The singles draw at the 28. NOVENTI OPEN promises high tension. Jan-Lennard Struff did the draw and landed a really demanding task for himself.

Record champion Roger Federer (ATP 8) starts his 18th campaign at the NOVENTI OPEN against a qualifier or Lucky Loser player. But the most spectacular first-round killer match at the 28th tournament in HalleWestphalia (12. bis 20. June) is a duel between the top-seeded second in the world Daniil Medvedev and the local Jan-Lennard Struff (ATP 42). Struff has been performing well lately. Quite a difficult task which the player from Warstein drew himself. “It’s of course a difficult task for me. But this is my home tournament. I want to take up the momentum of the last weeks und really accelerate,” Struff said about his killer draw. He only just lost to Argentinian Diego Schwartzman at the French Open in the quarter finals at the beginning of the week.

And the all-German opening game with French Open semi-finalist Alexander Zverev (ATP 6) and Dominik Koepfer (ATP 59), from the Black Forest who performed a thrilling third round fight against Roger Federer at the Grand Slam competition in Paris a week ago, garantees big tennis from the start. French Open finalist Stefanos Tsitsipas (ATP 5), who defeated Zverev on his way to his first ever Grand Slam final in a dramatic five-set match, will face a qualifier/Lucky Loser at the start of the ATP 500er grass competition. Same goes for the opponent of Japanese Ace Kei Nishikori (ATP 49).

High tension is guaranteed also at the opening game between Russian no. 9 Andrej Rublev and his compatriot Karen Khachanov (ATP 25). Canadian NextGen-hope Felix Auger-Aliassime (ATP 21) meets Polish Hubert Hurkacz (ATP 20), who was able to achieve his first high class success as champion at the Masters tournament in Miami in March. 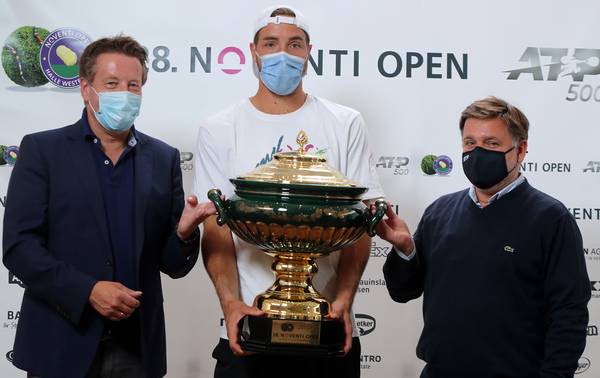