Daniil Medvedev: “A fantastic line-up and a real challenge”

Next Top Star arrived: the ATP-Champion from Russia is one of the favourites

ATP World Champion Daniil Medvedev (Russia/ATP 2) has arrived for his muchly anticipated debut at the 28. NOVENTI OPEN in HalleWestphalia. The 25-year-old from Moscow, who won the ATP final in London last autumn, and, has thus established himself as one of the new super stars of world tennis, was welcomed by tournament director Ralf Weber at the 28th top grass event (12. bis 20. June) on Friday evening. “Daniil belongs to one of the outstanding personalities of the tour. And, he is of course one of the big favourites for the title here“, Weber said. “We are very much looking forward to his first appearance. “

Medvedev is facing strong competition in HalleWestphalia, because, for the first time in the history of the tournament, five top ten players are in the line-up – apart from the top-seed Russian, Stefanos Tsitsipas (ATP 5), Alexander Zverev (ATP 6), Andrey Rublev (ATP 7) and Roger Federer (ATP 8) are starting, too. “This is a fantastic line-up. It will be a challenge right at the start of my grass season”, Medvedev said. At the French Open he had last reached the quarter finals. After his coup at the ATP Tour Finals 2020 – he had defeated the then number one, two and three (Djokovic, Nadal und Thiem) on his way to his biggest triumph of his career so far – the player from Moscow got back on track quickly in 2021, won at the ATP Cup with the Russian team and played his way into the finals at the Australian Open.

The success at the tournament in Marseille and reaching number two of the world rankings meant that Daniil Medvedev was recognized internationally by the press in March: With this historic ranking there was indeed a player not named Roger Federer, Rafael Nadal, Novak Djokovic or Andy Murray for the first time since 2005. “This means a 16-year-old era of the Big Four ends”, “SPIEGEL Online“ noted. 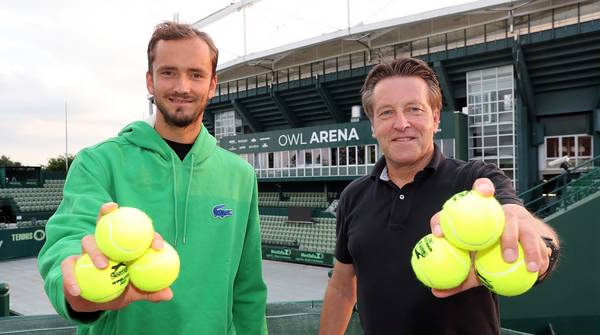 Ready for first service: Russian Tennis Star Daniil Medvedev (left), Worlds No.2, was welcomed to the Terrasse of the COURT HOTEL by tournament director Ralf Weber at the tournament start of the 28. NOVENTI OPEN © NOVENTI OPEN/HalleWestphalia (free of charge)