The Swiss wins superiorly against Pierre-Hugues Herbert in two sets

Final No. 13! Frenchman Pierre-Hugues Herbert doesn’t stand a chance against Roger Federer in the semi-finals at the 27th NOVENTI OPEN and the Swiss has his 10th title at the grass tournament in Halle in focus further after winning 6:3, 6:3.

Federer started his semi-finals against Herbert with an ace. Symbolic for the match, the 28-year-old had no chance of returning the Maestro’s service to get a point. He record champion of the tournament in Halle left no doubt about his mission, title no. 10, at the first encounter of the two on the ATP-Tour. He didn’t have one break point against him in the whole of the match. On the contrary he converted his chances for an early break straight at the beginning. The Frenchman, who had won the Australian Open this year with his compatriot Nicolas Mahut, came to the net and tried to vary his match by stops. He also faulted, though, which were exploited by the 37-year-old king of grass uncompromisingly. In the second service game of the world’s no. 43, too. Herbert had to fend off another break point. Federer served much too strongly for his opponent and dominated the match this afternoon. The fans’ favourite from Switzerland secured the first set 6:3 after 29 minutes.

The second round started with a struggle for the Frenchman, who had wished for Federer as opponent for the semis. He had to fend off three break chances. In the end he could decide the strongly-fought game. He gained confidence through this. At least his own service gained in the second set. Federer was not impressed, followed his route of play. The result was another chance to take his opponents service. This chance was exploited coldly and under roaring applause from the spectators on the Centre Court. With his routine the king of grass now brought the match to an end superiorly. A new break 6:3 brought Federer the fully earned victory and the entry to the final after 62 minutes. “The last couple of days were hard, that is why I am thrilled to be in the final” the Swiss said after the match.

In the final he will now meet Belgian David Goffin. This a duel which was already seen on the grass in Halle in 2016. The two opponents met in the quarter-finals then, with the better ending for Federer. 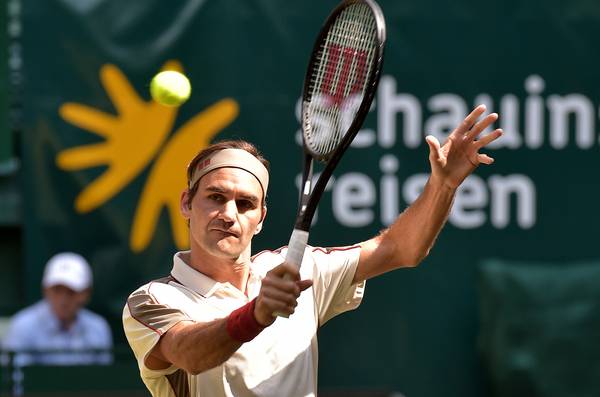 On the way to his 10th title in Halle, Roger Federer is unstoppable. Photo: NOVENTI OPEN/KET