First the fun, then work on the Centre Court: Ahead of the dream Finals at the 25th GERRY WEBER OPEN the two participants, record-champion Roger Federer and Germany's new super star Alexander Zverev, were guests at the GERRY WEBER OPEN Fashion Night, on Saturday evening -  the social highlight at Germany's most important tennis competition. "This tournament has a special place in my heart", Federer said during a talk with host Anna Kraft, Finals-opponant Zverev and tournament director Ralf Weber. "I feel so welcome here. That does good. And that is also the reason, why I have been playing so successful tennis here over the years." He had experienced "wonderful, unforgetable moments" Federer said. "Especially emotional was also, when we sealed the 'Lifetime Contract‘. This shows, how close the friendship to Halle is."

Alexander Zverev, who had done the first successful and intensive work-shift in the singles and doubles - here with his brother Mischa - on Saterday, called Federer "the biggest idol of my childhood and youth": "It's always a special feeling playing against him. I will do my best." Answering the question by host Anna Kraft, how fit he was after the tough Semifinals-match, the man from Hamburg smiled and stated, also looking at his opponant:"I am top-fit." When Zverev praised Federer by saying it was unbelievable, "what he was able to achieve at his age", amusing the 1,600 spectators in the VIP-area at the GERRY WEBER EVENT CENTER, the Maestro agreed quickly: "That's right. I'm not the youngest. And it isn't sure. I think this Final between us will be very cool."

Tournament director Ralf Weber talked of a 'dream final' for the anniversary of the tournament: "When I saw the draw, I thought: If it gets to this Final, it would really be great. And now it's here. It is absolutely perfect." Weber mentioned "the spectators unbelievable exaltation' over the last days. "The atmosphere was unique. I couldn't have imagined the tournament being better." The tournament director had before handed over a 15,000 Euros donation to TV-commentator Werner Schulze-Erdel, for the charity Good Hope Centre e.V. in Tanzania. A further 15,000 Euros had gone to the Childrens Hospital von Bodelschwinghschen Anstalten Bethel already during the tournament week at the GERRY WEBER OPEN. There was a Tombola for both charities during GERRY WEBER OPEN Fashion Night. Fabian Hambüchen, Olympia-winner in gymnastics, and one of the honoury guests of the evening, did the draw.

1,600 spectators in the sold-out VIP-area at the GERRY WEBER OPEN had a great party night celebrating the 25th birthday of the GERRY WEBER OPEN. With this tradionell Gala-evening of the GERRY WEBER International AG, with a Live-Act by Alle Farben, an exciting performance by Phil Os (Diabolo Jonglage) and with party music from the band Decoy and DJane. The party went on right into the early hours, also in the "Club 500", the stylish location in the VIP-area. 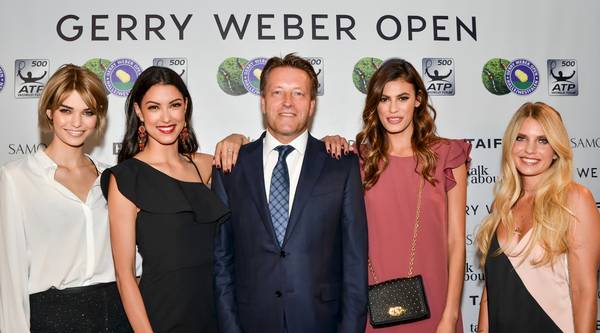