Klaasen and Venus defeat the title-defenders

Raven Klaasen (South Africa) and Michael Venus (New Zealand) are the winners of the doubles competiton at the 27th NOVENTI OPEN. They won against title-defenders Lukasz Kubot from Poland and Brazilian Marcelo Melo 4:6, 6:3, 10:4. Kubot and Melo were able to decide the doubles-finals at the grass tournament in Halle against Alexander and Mischa Zverev in 2017 and 2018.  But their victory run was stopped this year. Raven Klaasen has also some final experience in Halle. Together with Rajeev Ram from USA he won the title in the doubles 2015 and 2016.

The Polish-Brazilian duo took their opponent’s service right at the beginning. The Wimbledon winners from 2017 were not having this lead taken from them in the first set. With their own service Kubot/Melo brought their own game through solidly. Klaasen and Venus had more problems with their service at the beginning of the match. The no. two seeded double got into the match better and the easy faults could be reduced by the duo, too. But the title-defenders served with much self-esteem this afternoon from the experience of winning twice in Halle in the finals. The first round went to Kubot and Melo after 36 minutes 6:4.

And in the second set, too, the Halle champions of 2017 and 2018 had the chance to take the service off the duo from South Africa and New Zealand. This time, though, Klaasen/Venus could fend off the break point. The doubles final on the Centre Court became a more and more interesting and exciting match. The South African player and the New Zealander were stronger in the second round and were even able to get a set-deciding break to make it 5:3 and decided therefore the round 6:3 after 72 minutes.

The final in the doubles had to be decided in a match tie-break. In the deciding set Klaasen and Venus were the more dominant double. They showed their best tennis, grabbed the moment and won the set, the match and the title after 1:25 hours. “I can’t believe it; I am speechless” a clearly moved Michael Venus said after the match about their victory. 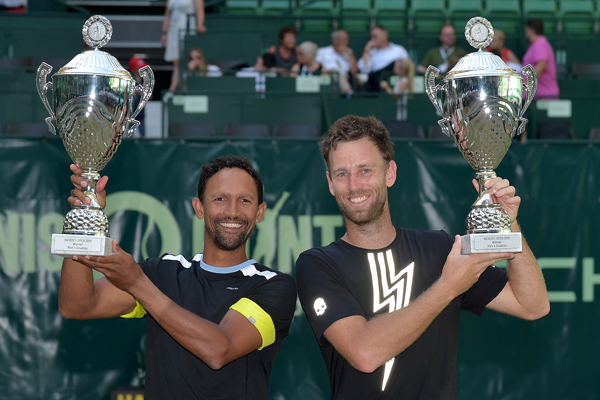 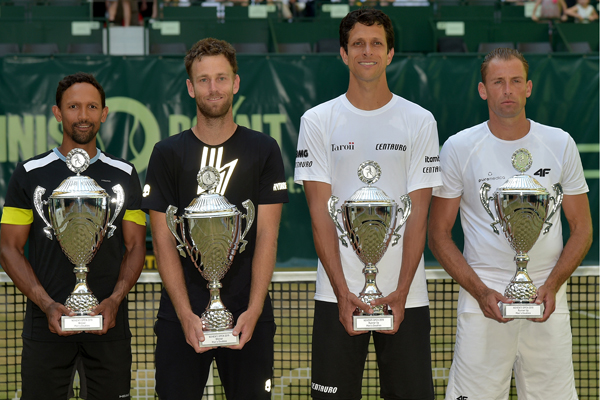 Raven Klaasen and Michael Venus at the award ceremony with their opponents Marcelo Melo and Lukasz Kubot. PHOTO: NOVENTI OPEN/KET