Kohlschreiber withdraws due to hip injury

The German has to cancel his match against Dominic Thiem

It was a sad press conference for Philipp Kohlschreiber. Germany's No. 1 has just announced that he will be unable to play Dominic Thiem in the quarter-finals at the GERRY WEBER OPEN. A hip injury makes playing impossible. "I am extremely disappointed, I would have liked to play very much", the 32 year-old said. He had tried everything and had been treated many times, but during warm-up it was clear: "It just isn't possible."
The injury was getting at him already in Stuttgart and was there again on Thursday in the match against Ivo Karlovic. The strain got worse over night. "It's really very bitter", the man from Augsburg said.
He has to pause for at least six days. He hopes to be fit again for Wimbledon. 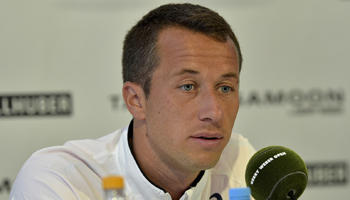