Just last week in Stuttgart they lost a match 7:10 in a match tie-break in round one. Lukasz Kubot and Alexander Peya showed that they can do it the other way round, too. In the semis of the GERRY WEBER OPEN they beat Henri Kontinen and John Peers 6:2, 1:6 and then came the 10:7.

In the finals the 34 year-old Polish man Kubot and his 35 year-old Austrian partner Peya will meet the title-holders Raven Klaasen and Rajeev Ram, who had beaten the Bryan-Brothers.

Even though they were beaten early on in Stuttgart by Berrer/Struff, Kubot/Peya belong to the top in the doubles. In Paris, not long ago, at the French Open they reached the semis, where they were beaten by the Bryans. Lukasz Kubot won four titles in the doubles in 2015, but each time with different partners. Alexander Peya got two tournament successes with his former regular partner, Bruno Soares.

Kubot/Peya have already played Klaasen/Ram this year - and lost. That was in the quarter-finals of the Masters in Miami. The score was, as you've probably already gathered: 7:10 in the match tie-break. 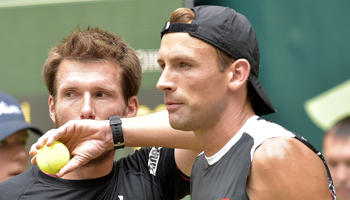