Matteo Berrettini is unstoppable on grass

The Italian is through to the semi-finals after beating Karen Khachanov 6:2, 7:6(4)

Matteo Berrettini (Italy) has obviously gained much self-confidence and been pushed greatly by his victory in Stuttgart last week. The 23-year-old was on the spot from the beginning onward against Karen Khachanov. His body language was clear, he was really there to win and to get to the semi-finals. Fully concentrated, making a fist after good shots, as to confirm and to power himself on. With this power Matteo Berrettini won the first match quickly after just 25 minutes 6:2.

On the other side was the top ten player Karen Khachanov, though. But the Russian was nearly helpless against the Italian in the first set. In the second set this was to change. Even though both players had difficulties with their service games, they were able to always fender off the break points. Matteo Berrettini had four break points to fender off, Karen Khachanov even had six. So the two went into the tie-break.

There the new Italian shooting star showed his ability. Speed variation through slice- backhands and stops – it was extremely difficult for Karen Khachanov to keep his rhythm. A so-called mini break was enough to decide the match. The tie-break went to Matteo Berrettini 7:4, who was relieved to get to the semi-finals: “It went well at the beginning. In the second set Karen got better though. Then it was an open match with a better ending for me.”

To get to the second final consecutively, Matteo Berrettini needs just one more victory. In the round of the last four he will meet Belgian David Goffin. 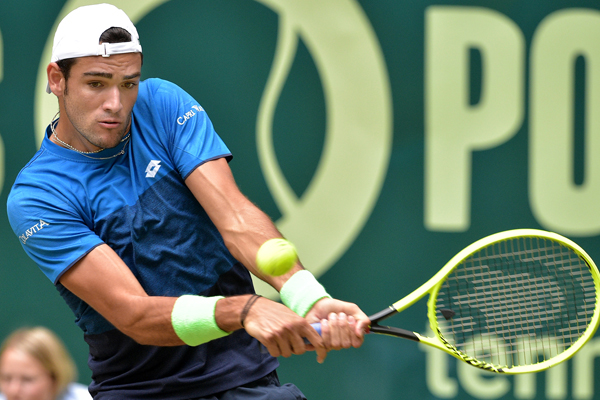