German unbelievably gets to the finals of the 24. GERRY WEBER OPEN

Alexander Zverev defeating Roger Federer was truely a big suprise. That Florian Mayer makes it to the finals at the 24th GERRY WEBER OPEN is sensational. On his come-back tour after a long break due to injury, the 32 year-old German is officially the World's No. 192. Only Niklas Kulti was further down the line: when he got to the finals at the GERRY WEBER OPEN in 1999 he was the No. 303.

Getting into the tournament by protected ranking, Mayer was able to improve from round to round. The Wimbledon-quarter-finalist of 2004 and 2012 showed his best performance against the world's No. 7, against THE player of last week - Dominic Thiem from Austria. He didn't stand a chance and the semis therefore ended 3:6, 4:6.

For 65 minutes the slim giant from Bayreuth was boss on the court. He was superior to his young opponent in every situation. The Austrian who had won in Stuttgart on Monday seemed to be tied and over-played, made mistake after mistake. Adding to this: "The rest because of Philipp Kohlschreiber's injury was not ideal for me", Thiem said. He had lost tenseness. "I was already in match modus when the match was cancelled."

An early break at 3:1 in the opening set got Mayer in the lead. And in the second set he also went ahead 3:1. But the semi-finalist in Paris battled, broke back 3:3. Now Thiem seemed to be back in the match. His hopes lasted exactly four minutes. Mayer took his serve again straight away and was not to be stopped from there on.

Dominic Thiem had only praise for his opponent:"He plays very unconventionally and has a lot of touch. I didn't stand a chance against him today", the up-coming player of 2016 said. Florian Mayer will now meet Alexander Zverev in the finals. A duel of the generations: Zverev is 19, Mayer is 32 years old. 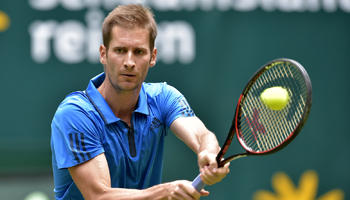