Hard-fought Victory into the Finals

After one hour and 25 minutes Roger Federer was able to cheer, 6:4, 7:6(5) on the scoreboard. With that he is in the Finals of the GERRY WEBER OPEN for the 11th time. He has already won the title at the lawn tournament eight-times, now the ninth is to follow. But his opponant, the young star from Russia, was quite a big lump to get by on the way into the last match of the tournament.  Karen Khachanov even gave away two set points in the second round. "I was in a defensive position too much, that's why I am tired now", a still clearly satisfied Federer said after the match.

In fact, it looked like a relaxing afternoon for the Halle-record-champion in the beginning. Straight away in the first game, he used his second break point. The young Russian was not impressed by that, thought, he took Federers' service, only the second break of the tournament, that the Swiss had to accept. The Maestro got another break to go ahead 2:1. After that, both players got their services through solidly. Especially the "Next-Gen"-star from Russia hit his serves close to service line regularly. After 33 minutes Federers experience got him to fender off a break point and his second chance brought him the set win.

Khachanov, playing his first Semifinals in a 500 tournament, was even able to force the Swiss tennis star into defence once or twice. With hard, well placed shots on the baselinen of the Swiss he convinced overall in his own service game. Federer tried again and again to take speed out of the rallys. The 35 year-old was clearly more variable than his counterpart. "I didn't know my opponant before and didn't know where he would shot the ball", Federer said afterwards. In a waiting game the world's no. five profited by the Russians' mistakes made to break 5:4. But Khachanov was a tough opponant: he got another break,, fendered off a break point of Federers and landed three aces in a row. The young star even had two set points, didn't get them through, though. After 77 minutes and a score of 6:6, the second round had to be decided in a tiebreak. Here the eight-times Halle-champion was more determined and concentrated: Match point for Federer, Error Khachanov and victory for the Swiss.

In the Finals the Swiss Audience-favourite will meet either German Alexander Zverev or Richard Gasquet from France. 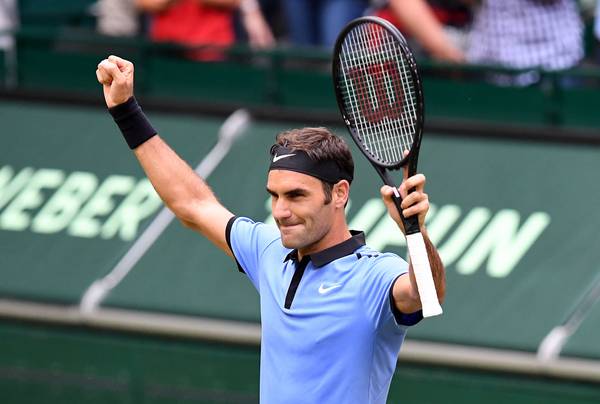