It’s obvious. Sebastian Korda looks just like his father Petr. He had reached the final of the grass-court tournament at Halle 1997, but lost to Yevgeny Kafelnikov back then. The Czech player now lives in the USA and his son was born there in 2000. Thus, Sebastian Korda is US-American, and that is why he is called“Florida-Sebastian“by the writer of this text, in order to remember his nationality better.

After this little excursion on nationalities back to business on the Centre Court at the NOVENTI OPEN. The 20-year-old will not reach the final this year. Ugo Humbert, who had played Alexander Zverev brilliantly in the round before, was able to go through 6:2, 6:7(5), 6:4.

Both started very nervously and didn’t serve as strongly as expected. They provided positive highlights with their returns in the first set, though. It was overall the man from France, who was able to put pressure on his opponent continuously and caused him to fault. He himself only lost his service once – even though he had to struggle more than he liked.

The nerves of both players were showing in the second round, too. The amount of faults on both sides were too high. Indeed both served better. Chances to break were rare. Into the tiebreak it went, which Sebastian Korda only just decided 7:5.

And on they went. Same as in the second set both Sebastian Korda and Ugo Humbert served securely, didn’t allow a break point up until 3:3. Then the US-American had two possibilities, but the Frenchman warded off the attack by his competitor brilliantly. Not to have used any of these break chances was treacherous. The player from France attacked even at a score of 5:4 and utilized his first break- and match point to make it 6:2, 6:7(5), 6:4. With this Ugo Humbert is the Marathon-Man at Halle, as he won all of his three matches each in three sets. 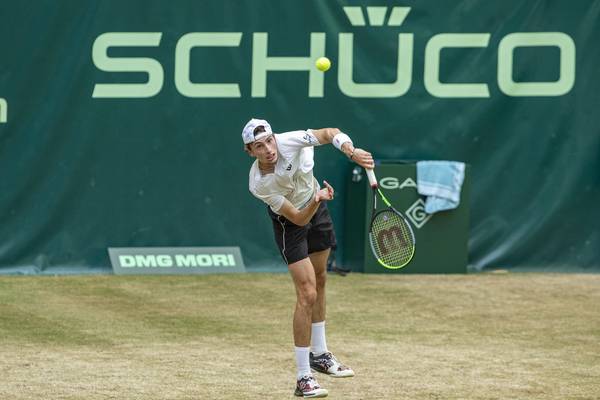