The German tennis fans are thrilled: Alexander and Mischa Zverev have reached the Doubles final again at the GERRY WEBER OPEN. In the Semis they beat the No. 2 seeded duo Nikola Mektic/Alexander Peya 6:3, 3:6, 10:5. With that Zverev/Zverev now have the chance to get revenge for last years defest against Lukasz Kubot and Marcelo Melo. Back then it was a close loss 7:5, 3:6, 8:10.

Alexander and Mischa Zverev harmonise really well and have definitely earned their ticket to the finals. The brothers showed mental strenth, won against the No. 3 seeded Aisam-Ul-Haq Qureshi/Jean-Julien Rojer and against the German Davis Cup Duo Tim Pütz/Jan-Lennard Struff in the two first rounds, each one in a match tiebreak in the third set.

In the finals it's garanteed that we will see extra class tennis. The top world ranking places speak for themselves. Lukasz Kubot and Marcelo Melo are on positions three and four. In the Semis the Polish-Brazilian duo beat Ivan Dodig and Rajeev Ram 6:7(5), 6:3, 12:10. 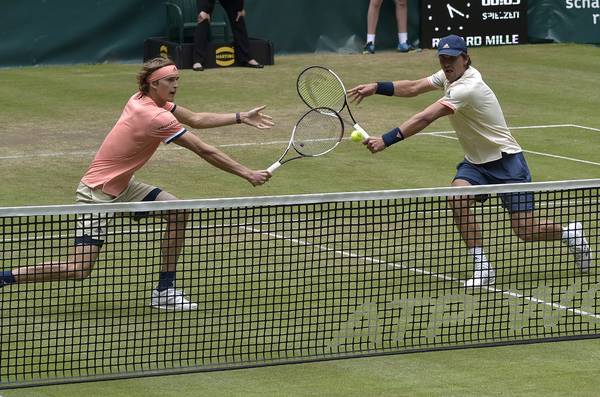