Sascha aims for the finals

At precisely 13.46 h he stretches his arms to a cloudy sky in Halle: Done! Sascha Zverev has reached the semi-finals for the first time at the GERRY WEBER OPEN. In the opening of the quarter-finals the 19 year-old German defeated birthday boy Marcos Baghdatis, who turned 31 on Friday, in a high-class match.  He needed exactly 91 minutes for his 7:6 (9), 6:3-success and is still without losing a set.

The crucial point in the match was the tie-break in the first set, in which Zverev was standing with his back against the wall many a time. Up until then both strong-serving opponents didn’t admit a break-point. Baghdatis tried to commit Zverev to long rallies numerous times and slowed down speed often.  The longer the game took, the better the German adapted to the Cypriots baseline game. Once again it was impressive to see how Zverev got his grips together. He wasn’t even bothered by five set-points by Baghdatis in the tie-break and trusted on his own strong serves. Now fascinating grass court tennis was to be seen with long rallies in which Zverev also showed the right dose of patience. The reward was a score of 11:9, which was celebrated by the more than 10.000 spectators frenetically. And Zverev joined in, too: After getting the set-point he invited the audience to cheer on even more loudly.

No sooner said than done: the tennis fans from East-Westfalia were right behind Zverev, who got even more self-confident in the second set and who, in the fourth game, enforced the first and only service loss. In the end Baghdatis had no answers to the German’s thundering (230 km/h) and precise first serves and the path was clear for Zverev.

“Especially in the first set it was a match at a high level. We played a lot of long rallies. That is quite unusual for a grass court match. I am just glad that I pulled through to the semi-finals“, the obviously relieved Alexander Zverev summed up.

Getting through to the semi-finals in Halle also has a greater meaning for Zverev in Wimbledon. For the first time in his carrier he will probably be one of the 32 seeded players at a Grand Slam tournament on Church Road. 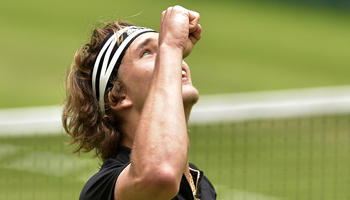 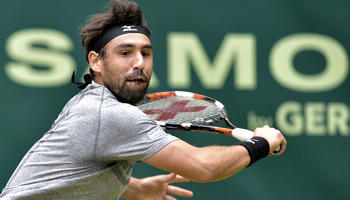