The GERRY WEBER OPEN are increasing as a global brand

Tournament director Ralf Weber has named the 24th GERRY WEBER OPEN as a "Tournament with extremly high quality sport". In his personal balance Weber stated: "Even though the weather was crazy there was a great atmosphere. Our spectators just didn't lose their good mood at all.“ After a provisional calculation the audience numbers will be at a super level in 2016, at about 110.000 fans. From the start of Germany's top compition 1993 approx. 2,5 million people have visited the tournament. Weber said, that the rise of internationily also mirrors in the structure of the visitors, now fans come from all over the world to HalleWestfalia: "We greet fans from Australia, Japan, the USA or from South Africa. Of course thanks to Roger Federer there are always a lot of visitors from Switzerland.“

In the "best draw of all times", seven professional players of the world's best 15 started, and the local heros play very well "as always at the GERRY Weber Open", Weber stated: "It is like a 'feel-good-oasis' for them, a place to show top performances." At the 24th edition of Germany's top tournament three Germans got through to the quarter-finals and two to the semi-finals, amoungst them super talented Alexander Zverev. Weber again pointed out the "exceptional partnership" of the tournament with Roger Federer: "He is the personality in the history of the tournament. The face of the Gerry Weber Open. He simply loves this place, the fans here, the special atmosphere. It's good to have such a 'Lifetime Contract' with him."

The GERRY WEBER OPEN are an "important global brand", according to tournament director Weber: "The interest in the tournament is constantly increasing all over the world. There is broardcasting in 140 countries, furthermore nearly 400 journalists report from Halle for the world-wide media." Via social media the ATP 500 Grass tournament reaches up to 25 million people daily, hundreds of thousands visit the online website in the week of the tournament.

Next year the national TV-broadcasts will be devided the tournament director explained:"We are just ahead of signing a contract with the ZDF for 2017 and 2018 - with an option also for 2019. The ZDF will broadcast a semi-final and the finals, perhaps in the future also a quarter-final“, Weber said, "the extensive reporting by Eurosport has to be added, too. The contract by Sky with the ATP is not valid for us. For us it is very important that the tournament can be seen on free-TV“.

The GERRY WEBER OPEN were also a "great success" in the marketing sector: "All the boxes and stadium side fences were fully booked months in advance. The Airlines Emirates and the hotel-group Jumeirah added to the numorous top-sponsor partners, who are also enthusiastic about the international and global impression of the tournament."

Tournament director Ralf Weber thanked all the tennis professionals for their engagement in the charity activities of the GERRY WEBER OPEN - the visits to the Childrens clinic in Bielefeld Bethel and also to the "Wertkreis“ in HalleWestfalia. Weber stated that Dustin Brown raised a donation of 1.000 Euros to 2.500 Euros after his visit to Bethel: "That is a wonderfully emotional gesture. Overall, I think it is a wonderful tradition that the players stand up for a good cause.“ The GERRY WEBER OPEN charity programme has raised over 2,2 million Euros so far for social and initiative facilities in the region. 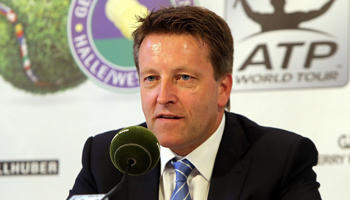