Lukasz Kubot and Marcelo Melo are again the winners in the doubles finals at the GERRY WEBER OPEN. In the new edition of the final in 2017 they were able to defeat Alexander and Mischa Zverev again 7:6(1) and 6:4. They have thus defended last years victory.

With a strong performance and perfect interaction the Polish-Brazilian duo convinced over the whole duration of the tournament. And also in the final the two No. 1 seeded doubles players showed their best game and it only took them two sets to take the title once more.

Early in the first set Zverev/Zverev took their opponents' serve. Kubot and Melo got a rebreak, but the Germans didn't seem that much impressed. They carried on with their game. The top-seeded Lukasz Kubot and Marcello Melo profited by a strong service game. Both duos faught for every point. It was then down to the tiebreak to decide. Here Kubot and Melo played impressively and won the first round after 47 minutes.

In the second set Kubot/Melo got the first break. Alexander Zverev was not glad about a point being deducted and started a long discussion with the umpire. The brothers then quickly got the rebreak. The Brazilian-Polish duo wasn't impressed, took the service and won after 1:27 hours the doubles final at the GERRY WEBER OPEN again.

After the victory in the final Kubot first thanked the spectators in Halle: "Thanks, you were a wonderful audience here today. I hope you all enjoyed the match." 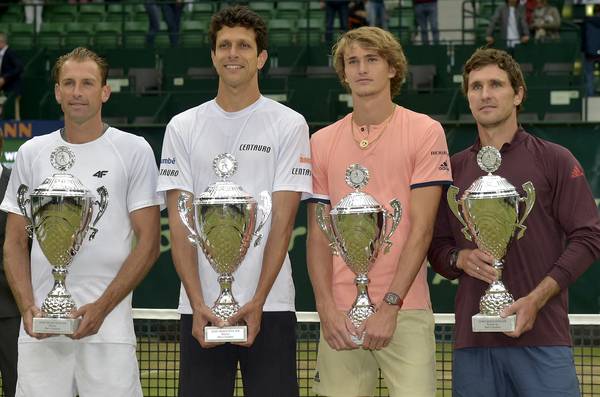