Halle in Westphalia (Germany), 17 January 2020. Germany’s biggest ATP tournament and Germany’s biggest healthcare provider NOVENTI remain a successful pairing: The corporate group from Munich will also continue to serve as the name partner at the OWL ARENA at the next three tournaments from 2020 to 2022. Last year, when Roger Federer won his tenth title, NOVENTI, the market leader in all segments of the healthcare market in Germany, was the name partner of the traditional tournament.

”After last year’s successful premiere, it is the logical step for us to continue our involvement as name partner of the biggest tennis tournament in Germany,” said Dr. Hermann Sommer, Chairman of NOVENTI Health SE. ”Hence, we further support the strengthening of health services in Germany and, in particular, of owner-operated local pharmacies. Furthermore, we would like to set an example for health care in our country this year – the year of the introduction of e-prescriptions. Therefore, we will present this with our NOVENTI eRezept-Lounge (e-prescription lounge) at the venue.“

”I am delighted that NOVENTI will remain by our side as a strong and renowned partner for another three years,” said Ralf Weber. ”The first joint appearance last June was a real win for all. “Tournament director Weber sees the decision of NOVENTI as a “confirmation for the enormous appeal” of the ATP 500 competition, as well as of the tennis venue in HalleWestfalen as a preparation tournament for Wimbledon. ”There is a massive interest in our tournament and the brand which we have developed over the past almost three decades,” Weber adds. ”Also, as Germany’s biggest tournament, we only want to work with Germany’s biggest healthcare company and therefore are very happy to continue our success story with NOVENTI for a very long time.”

Dr. Sven Jansen, Board of Directors of NOVENTI Health SE explains: “As strategic partner of the NOVENTI OPEN, it is our goal to also transfer our values and visions regarding the topic of health and sustainability in Germany and the world to the most important tennis tournament in Germany. We already started with this last year by making the NOVENTI OPEN the first climate-neutral ATP 500 tennis tournament in the world. We will continue to develop this and therefore look forward to the future together.”

Last year, the NOVENTI OPEN was broadcast live on TV in over 170 countries worldwide. For the 28th edition of the tournament from 13 to 21 June 2020, a world class field has once again announced itself, with defending champion Roger Federer (ATP world number 3) leading the way. A top-class quartet of contenders intends to prevent the Swiss “maestro” of making another clean sweep: Alexander Zverev, Germany’s number 1 (ATP 7), has, as have Russia’s star Karen Khachanov (ATP 16), Japan’s ace Kei Nishikori (ATP 17) and the Croatian tournament winner of the year 2018, Borna Coric (ATP 28),committed to attend the event. ”Once again, we will experience absolute world class tennis in Halle,” said tournament director Ralf Weber. ”The fans worldwide can look forward to great tennis days at the OWL ARENA.”

The NOVENTI Group is the market leader in the healthcare market in Germany and with over €20 billion of prescription billing volume, it is Europe’s biggest billing company in the healthcare sector. With its 2,500 employees and 20 independent subsidiaries, the NOVENTI Group is united by a common ground: they all operate in the healthcare sector with pharmacies, other service providers, nursing services and doctors as their core target groups. Apart from funding security, it offers a network which promotes the know-how transfer across the company. Sustainability is one of the basic principles of the company strategy, NOVENTI received awards as a climate-neutral company and as a “Great Place to Work.”

Prices are available on the internet portal of NOVENTI OPEN. Tickets can be purchased via the ticket hotline +49 (0)5201 81 80, as well as here and all eventim-booking agencies. You can reach the TICKET CENTER via e-mail at karten@@owl-arena..de or at the following address: Weidenstraße 2, D-33790 HalleWestfalen. 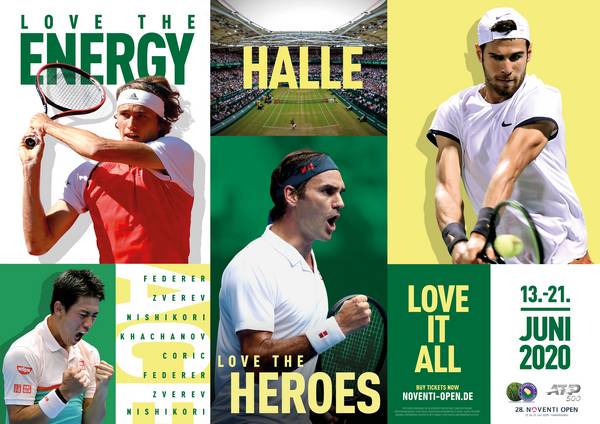