On Thursday: Alexander Zverev wants to reach the Quarter Finals

Alexander Zverev wants to take the next step on the way to title victory at the 28. NOVENTI OPEN on Thursday. The world’s No. 6 meets Ugo Humbert (ATP 31) from France, who is starting at the ATP 500 top event in HalleWestphalia for the first time. “I hope I have now found the tournament rhythm. But I can’t and I shouldn’t look too far ahead, just concentrate on the next task” the 24-year-old from Hamburg said. Germany’s No. 1 had defeated compatriot Dominik Koepfer (ATP 53) in a furious three-set fight. Even more suspense was to be experienced in Humbert’s starting victory, in which he won in a tiebreak of the deciding set 7:5 against American Sam Querrey (ATP 63). Zverev and Humbert will meet for the first time ever in a tour match at the NOVENTI OPEN.

Same for the duel of Japanese super star Kei Nishikori (ATP 57) and NextGen-player Sebastian Korda (USA/ATP 52). The son of the former Grand Slam-Champions Petr Korda belongs to the most remarking newcomers of the season 2021, he won his first ATP tournament in Parma, too. The 20-year-old also made an impressive mark in his performance at the final in Delary Beach and by reaching the quarter finals at the Masters in Miami – on the way to the round of the last eight he defeated the Italian Fabio Fognini and top ten-man Diego Schwartzman (Argentinia), before being stopped by Andrey Rublev (Russia/ATP 7). “I have found my place on the Tour. I want to stay further on course for success “, Korda said. Not only Sebastian is carrying on the success story of the sports-mad family Korda: two of his sisters, Jessica und Nelly, are absolute top players at the LPGA Tour, the female professional tour in Golf. Mother Regina (maiden name Rajchrtova) had climbed to No. 26 of the world ranking in her active tennis career.

Places in the quarter finals are to also be won in the Centre Court-games between Lloyd Harris (South Africa/ATP 51) and Lukas Lacko (Slowakei/ATP 214) as well as Nikoloz Basilashvili (Georgia/ATP 30) and Arthur Rinderknech (France/ATP 119). Basilashvili is not unknown in HalleWestfalen, he belonged to the BREAKPOINT-Team, trained with the highly regarded coach Jan de Witt. Basilashvili did his preparation for the season 2021 in HalleWestfalen in December – what paid off. At the competitions in Doha and Munich the 29-year-old held the winning cup up this season. In the Golf he also defeated the comebacker Roger Federer on his way to the title in the quarter finals. In Munich he won the finals against his friend and training partner Jan-Lennard Struff. 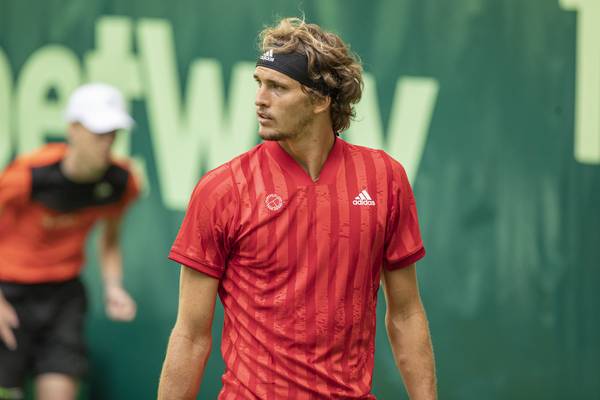