Andrey Rublev was able to win 12 of the first rallies of the match against Karen Khachanov. With this, the no.4-seeded Russian started very well at the NOVENTI OPEN. His compatriot managed to get into the game later, but because of Andrey Rublev‘s enormously strong service, the first set was his. After 31 minutes the world’s no. 7 had his first set point (6:3).

The returner didn’t stand a chance in the second set. Andrey Rublev and Karen Khachanov, too, served strongly, didn’t allow a break point up to 5:5. Then Andrey Rublev had two break points at a score of 15:40, Karen Khachanov showed strong nerves, however, fended these off, and with two further points he held his service. It went into a tiebreak.

The other way round in this tiebreak: There were four so-called mini breaks straight at the beginning. Karen Khachanov, especially, was unnerved by this, had already been warned for hitting the ball away. Both stayed brave, risked a lot. Rewarding direct points. At a score of 4:3 Andrey Rublev treated himself to a further mini break. The world’s No. 7 faulted twice in the first match point but used the second match point to make it 7:5 and thus, 6:3, 7:6(5).

Andrey Rublev won the Russian duel for the first time on the ATP-Tour. In the two duels before Karan Khachanov had always left the court victorious. 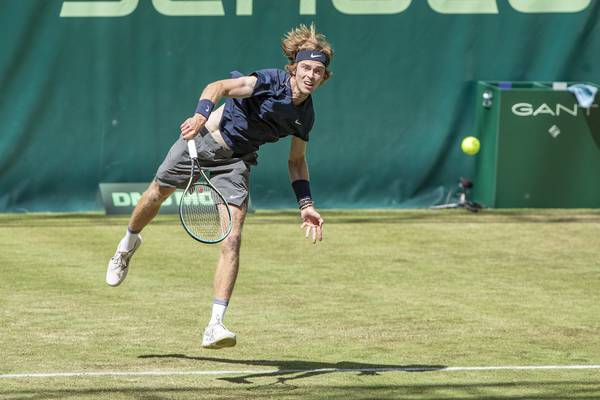 Andrey Rublev is in top form and is one of the favourites at the NOVENTI OPEN. PHOTO: NOVENTI OPEN/Mathias Schulz