Auger-Aliassime with effort through to the round of 16

Felix Auger-Aliassime is living up to his role as the favourite. But, it was much more difficult than anticipated for the World No. 9 against the Marcos Giron US-American to win 6:3, 5:7 and 6:3. Because after winning the first set and leading 3:1 and 4:2 in the second the 21-year-old Canadian already looked very much like winning safely. ”Then I had a bad phase”, Auger-Aliassime said.  “It was important, however, that I came back and important is also the result at the end“. With now 21 victories and only seven defeats he has an excellent career balance on grass.
Auger-Aliassime already defeated his 28-year-old competitor at the TERRA WORTMANN OPEN last year, back then in the quarterfinals, and, with a score of 6:3 and 6:2, very clearly, too. He was only stopped by Ugo Humbert, later the tournament winner, in his debut in the semi-finals in Halle 2021. Now he wants more. But, he has to bring more consistency into his game. He did hit 32 winners, but 23 unnecessary faults speak somewhat for themselves, too.
Set one went as expected. With Auger-Aliassime breaking his opponent once (3:2), and then winning the match 6:3. And the second round also didn’t surprise either. Twice the highly favoured was a break ahead against the World No. 60, twice Giron was able to counterattack, and Giron then controlled the game. With a 6:5 he was a break in front himself and thus brought his service and the set home.
The third round then went quite evenly again, until Auger-Aliassime took Giron’s service anew – 4:2. This time though, the Canadian played flawlessly and converted his first match point to win in three sets. He will now play US-American Mackenzie McDonald to get into the quarterfinals. The clear goal: to further better the good balance on grass. 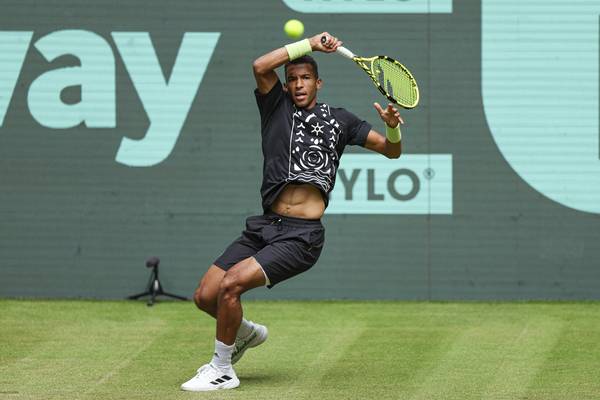