Borna Coric celebrates his first victory in Halle in Westphalia

No celebration party for Roger Federer. Borna Coric is the winner of the 26th GERRY WEBER OPEN 2018! In a high-class and exciting final the Croatian underdog won against the series-winner in Halle Roger Federer 7:6 (6), 3:6, 6:2, won against the Swiss for the first time ever and celebrated winning his first title on a grass court. Federer missed his 10th title victory in the Eastwestfalian, so called, "linden tree town". Because the Swiss lost in the final today from Monday on the Spaniard Rafael Nadal will be the World's No. 1 again. Federer had won 20 matches in a row on a grass court before losing this one.

Roger Federer really wanted his jubilee title at the 26th GERRY WEBER OPEN. This was noticed at the with 11.500 spectators packed GERRY WEBER STADION from the first rally onwards - and the many fans of the tennis icon helped him where they could. Under the closed roof the favourite from Basel showed presence straight away and left no doubt who was the dominant server. When there were longer rallies, high-class tennis was shown and Coric played at eye level. The first Croatian to ever reach a final in Halle/Westfalen presented himself as a very stabil precise worker, who, after his first nervousness had gone, was able to challenge Federer well. So it was no big surprise that Federer had to go into a tiebreak for the forth time in the tournament. Here the Swiss looked like a comfortable winner, but weak use of chances saw his work useless. Before he had left two chances to break, now even two set points were left. Coric seemed, even though only 21, extremely worldly-wise, got four points in a row after a score of 4:6 and there were surprised looks all round as he won the set. The odd thing was that Federer had got five points more than his opponent in the first set, went away empty-handed, though.

It was very impressive how the Croatian was able to face the World's No. 1 powerful game. And just by the way he also demonstrated why his opening victory against Alexander Zverev had not been a flash in the pan and contradicted all his critics who had forcast a weak performance on the grass court. Ahead of this tournament the man from Zagreb had only won two matches on the grass court.

The Maestro quickly got over the first set and in the second set he had much more advantages. Nearly without difficulties he got his service through, performed a very powerful return, minimised his number of faults and also had a bit of luck on his side. Coric was able to fender off two break chances, but then he an easy volley fault occured. This a salvation for Federer who shortly afterwards got the set and leveled (6:3).

Roger Federer probably played his best tennis of the week, but also Borna Coric wasn't giving up and turned up a little, too. The youngster's service got better and he plucked up courage. This was to pay off in the sixth game. Coric forced the first break chance by powerful baseline shots, Federer's backhand slice was faulty and all of a sudden the serial winner at the Gerry Weber Open was standing with his back to the wall. Federer was able to fender off on match point in his service but shortly after that the Swiss ended the match by a volley error. An error, that stands for the differing performances of the week.

"I didn't expect this. I am just happy to have won my first tournament on a grass court here and then against Roger Federer", Borna Coric said after his great victory, clearly looking for words.

"I really tried everything, but I'm sorry it was a close failure. Borna played well. He was a bit better in the most important moments and very constant. He did that very well and has won deservedly. The spectators were a dream again. I'll see you again next year“, Roger Federer promised after losing his first final in six years. Back then, he lost to Tommy Haas. 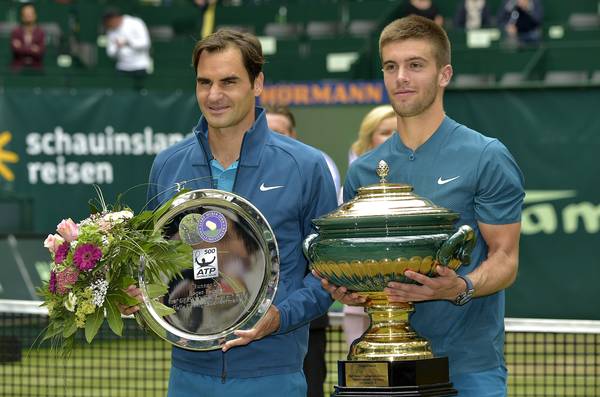