The tiebreak is his thing

In the finals at the TERRA WORTMANN OPEN the World No. 1 Daniil Medvedev will be challenged by Hubert Hurkacz. The Polish player had just overcome Australian Nik Kyrgios 4:6, 7:6(2), 7:6(4) in the semi-finals, who had still had all of the attention towards the beginning of the semi-finals match.

As usual, Nick Kyrgios goes onto the Centre Court in Halle very casually and cool to play his semi-finals match against Hubert Hurkacz. The scene reminds you of a performance of a pop start and yes, the 27-year-old Australian player is the current star of the tennis world scene. Even before the match gets underway, he gives the first towel to a spectator as a gift. Tunnel vision, full concentration on the match - Nick Kyrgios doesn’t seem to need that. And still he is on cue from the start. The returns don’t work out at the start against the strong serving Polish player, but you always get the feeling that Nick Kyrgios never loses track and it will only be a matter of time for him to break. That he can do at 5:4 and because he can get all of his service games through easily, he wins the first set 6:4 in 30 minutes.

Hubert Hurkacz wasn’t impressed by his set-loss. He did, what he can do best, serve.  Nick Kyrgios didn’t stand the chance of getting a break in the second round. Indeed, he also didn’t give his opponent a chance to break and so, the decider of the second set came in the tiebreak. The Polish player showed his best tennis ever in this round. Quick returns meant he could win the tiebreak straight 7:2.

It was very similar in the deciding set. Hubert Hurkacz and Nick Kyrgios, respectively, served solidly, so long rallies were seldom. And again it went into the tiebreak. Hubert Hurkacz kept calm and after just over two hours he converted his first match point to 4:6, 7:6(2), 7:6(4). As also in the round before against Felix Auger Aliassime he couldn’t get a break, but instead he is not the real tiebreak king of Halle.

“I am really happy. That was a very tight match. Nick and I didn’t give each other anything for granted, we both played really well. Now I’m looking forward to the finals against Daniil. Playing against the World No. 1 in the finals. That is something special. Special, mostly, because of the great audience here”, the Polish player stated enthusiastically on his entering the finals. And then he also addressed his compatriots in Polish, who had supported him during the match. 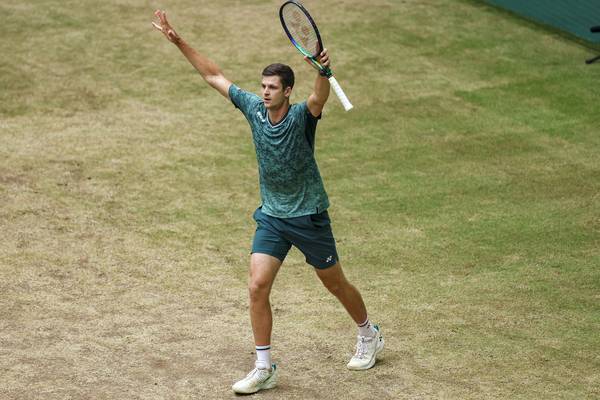