Defending champion is out

When you are under pressure, you yourself have to put pressure on, too. That’s how Hubert Hurkacz and Ugo Humbert did it in their round-of-16 at the TERRA WORTMANN OPEN. In the end it was Hubert Hukarcz who was the braver player and thus he secured the entry into the round of the last eight 7:6(5), 6:3.

And it’s a fact that this year’s winner will be a player never to have won the grass tournament in Halle before. In the whole of the participant’s field only Ugo Humbert had had the pleasure to hold up the winner’s trophy last year. The Frenchman is running behind on his form of last year and so, title defence is not going to happen.

Yet he could have decided at least this round-of-16 match, as Hubert Hurkacz was not performing at top level, either. The match was defined by many faults. It was the match of many missed chances. At 5:4 in the first round, Ugo Humbert wasn’t able to convert two set points. The revenge, a tiebreak, followed, which Hubert Hurkacz finally won 7:5.

Ugo Humbert had been able to turn arrears in the first round. This now was not possible – due to the many faults he made. Hubert Hurkacz on the other hand, stayed calm, played matter-of-factly. As also at 2:2, when he had to fender off a break point. He then hit, just like in the first set when it went into the decider of the round. At 4:3 he took Ugo Humbert’s service – the decision of the match. He then served solidly and converted his second match point after 1.45 hours.

“Firstly, I would like to apologize to the lady I hit unintentionally”, Hubert Hurkacz prioritized this action for which he had received a warning, after his entry into the quarterfinals. A ball which he had hit furiously had landed in the audience via detours. Other than that the Polish player was of course very satisfied, even if there is still a lot of room for gains. Hubert Hurkacz will have to increase his level in the round of the last eight, to go further at the TERRA WORTMANN OPEN. 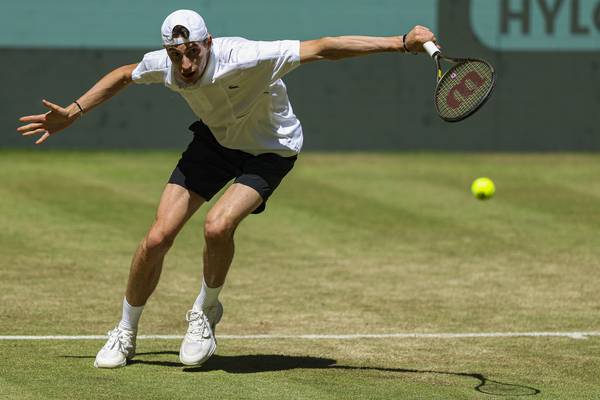 Ugo Humbert is defeated by Pole Hubert Hukarcz and thus is not able to defend his title. Photo: TERRA WORTMANN OPEN/Mathias Schulz