The World No.1 plays in Halle

Daniil Medvedev reveals a secret about grass at the 29. TERRA WORTMANN OPEN

There can hardly be anything greater for a tennis tournament than having the World No. 1 in the main draw. And this is precisely what is happening at the 29. TERRA WORTMANN OPEN in Halle. Daniil Medvedev has reached the World ranking position one for the second time this Monday and is of course also positioned at number one in the tournament. “I am happy to be right at the top again, and have really earned it, too“, the 26-year-old said at his opening press conference at the OWL-Arena. He stressed that also probably because he had lost in straight sets against the Dutch underdog Tim van Rijthoven very unexpectedly the previous day in the finals at s’Hertogenbosch. ”But the world rankings covers 52 weeks and not only one, otherwise we would have a new number one all the time”, Medvedev said and laughed.

In these 52 weeks he was the overall most constant player, won the US Open, and was in the finals in Australia. He is still missing a title in 2022, though. “Perhaps I’ll do better in Halle.” This could also be possible because the 1.98 metre giant has improved his game on grass considerably. 2021 he won the title in Majorca, the finals followed now in s’Hertogenbosch; “I am getting stronger on grass and I’m very happy about that because grass used to be my favourite surface.” Today this was the hard court, as “I can bring my game better to the fore“. It was more difficult to break the opponent’s rhythm on grass but that was exactly the strength of his game, Medvedev stated. “But I like the lawn. I have a lot of potential there und am continuously improving“.

The title favourite will meet David Goffin in the first round at the 29. TERRA WORTMANN OPEN. Not an easy draw, as the Belgian was in the finals at Halle 2019 and he defeated Medvedev just a few weeks later in Wimbledon in five sets. ”Yes, David is dangerous on grass - that is a real test to start with”. The new World No. 2, however, the German Alexander Zverev is missing in Halle due to injury.” That is very sad for the tournament, as it would have been a great constellation with both numbers one and two”, Daniil Medvedev said. He hadn’t seen Zverev's injury in Paris live on TV, but had followed the match in scoring. ”Suddenly it didn’t go on in the tiebreak. Then I received messages from friends who had seen it”.  He wished Zverev a speedy recovery. The German could have himself climbed to the top position by a tournament victory at the French Open.

Taking a look back at the defeat at the finals in s’Hertogenbosch, which of course Medvedev was also asked about: “I had a clear match plan, but it didn’t work out at all”, he explained with a grin. His opponent Tim van Rijthoven, having never before played an ATP-tournament ahead of the event, had played unbelievably. „If he goes on like that, he will reach the top 30, perhaps even the top 10”, Medvedev said about the 25-year-old surprise winner. And then there was a moment you could see the experienced view of a number 1 player: “But you do need a little luck and resilience to rise“. There were quite a few surprise winners but many had never reached that level of play again. 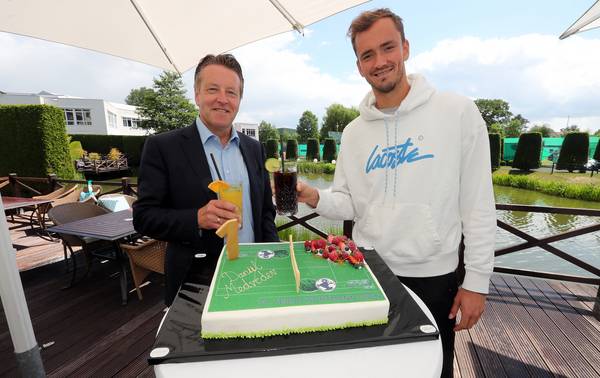