Puetz and Venus are beaten in a dramatic Champions-Tiebreak

Marcel Granollers (Spain) and Horacio Zeballos (Argentina) grab the doubles title at the TERRA WORTMANN OPEN in a very dramatic final. They won against German-New Zealander team Tim Puetz and Michael Venus 6:4; 6:7 and 14:12. In was the first title this season on the ATP-Tour for Granollers/Zeballos.

Tim Puetz and Michael Venus, who hadn’t lost one set before the final match and have already won the title in Dubai 2022, nearly were able to be the big comebacker-kings. The first round was lost 4:6, but by the 7:5 in the tiebreak of the second set they got a match tiebreak, which is renamed Champions-Tiebreak in the finals. Puetz and Venus were behind quickly at 0:5 and 1:6, but they didn’t give up the match. At 8:8 they were able to equalize, at 10:9 and 12:11 they even had match points. Granollers/Zeballos, however, stayed cool and got their third match point 14:12 to win the match. The comeback of the German and the New Zealander, both 34-years-old, was without Happy End; reaching the finals for the first time, however, is a big success, which means self-confidence for their next tasks.  Wimbledon is just around the corner and perhaps these two world-class doubles teams will meet again in one of the later rounds.

Marcel Granollers (36) and Horacio Zeballos (37), Wimbledon-finalists of 2021, are thus the successors of Kevin Krawietz and Horia Tecau, who had won the title in Halle last year. Puetz would have been the ninth German player to win the doubles title in Halle. Up till now, Michael Stich, Karsten Braasch, David Prinosil, Mischa Zverev, Christopher Kas, Philipp Kohlschreiber, Andre Begemann and Kevin Krawietz have achieved this.
By the way, doubles record-winning player is Raven Klaasen, in Halle. The South African won 2015 and 2016 together with Rajeev Ram and with Michael Venus 2019. 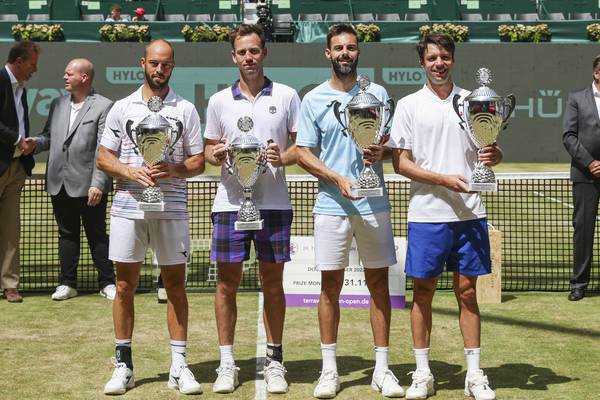