Nick Kyrgios storms into the Semi-Finals

Nick Kyrgios was not to be stopped on his way into the semi-finals by Pablo Carreno Busta at all in the quarterfinals. The Australian player won 6:4, 6:2 in straight sets. The 27-year-old had a lot of fun during the match and the spectators had fun, too.

Whose towel belongs into the box 1? The two competitors were more occupied with the question of where to put their towels correctly than the action on the Centre Court at Halle. This problem didn’t seem to bother the Australian player that much, at any case he got going like the fire brigade. Nick Kyrgios had two break points in his Spanish opponent’s second service that he couldn’t bring through, but then he caught up again in the next service game.

Adding to that, he won four of his five service games to love and so, after 36 minutes, won the first round 6:4. Pablo Carreno Busta, however, didn’t have the means to break the Australian‘s rhythm.

And this carried on in the second round, too. Nick Kyrgios got a break at once, which he cheered loudly about, and then delivered another service to love. In between, the 27-year-old Australian showed respect towards his opponent, when he had played a good shot or when he tried a return shot one metre behind the t-line or when playing a low service. You could see his superiority in these actions. Nick Kyrgios, by the way, kept swapping towels, used the Spaniards towel up until the end of the match.  . Pablo Carreno Busta, who is rather a rational, calm player, seemed distracted by these actions, and wasn’t focussed on his game. And that’s why he wasn’t really able to respond accordingly. The match was quickly won. Nick Kyrgios converted his second match point to win the match 6:4, 6:2 after 68 minutes.

“I am really good because I like it here a lot. So we’ll see how far I get“, he said looking optimistically towards the next match. He’s feeling good, anyway, in Halle; he is taking part at the grass tournament in Halle for the first time. And, Nick Kyrgios is without doubt, one of the candidates for the title at the TERRA WORTMANN OPEN. 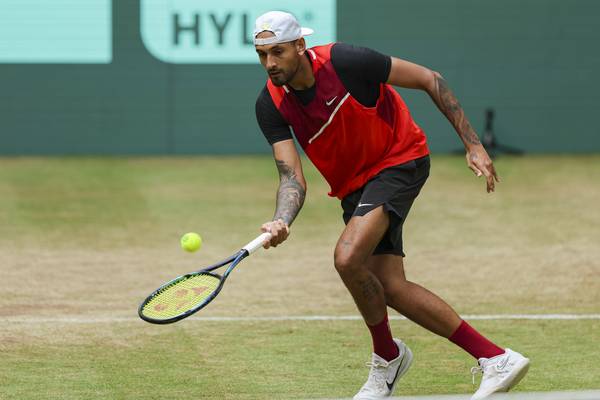