Roger Federer gets going on his "Mission to defending the Title" at the GERRY WEBER OPEN. On his way to his 10th title in Halle Federer got a hard-fought victory against the Australian Matthew Ebden in the Quarterfinals 7:6 (2), 7:5 and was, just like on the previous day, under pressure quite a bit. It was Federer's 19th victory on the grass court in series.

It was clear that Roger Federer, after his thriller-match in the Round of Sixteen with two match points fended off against Benoit Paire just 22 hours ago, was still tense.  The Australian Matthew Ebden, who awaited the Maestro, was, even though it was their first encounter, no unknown, but the Australian had made a mark with his strong faught grass court matches in the last few weeks and overall by beating Philipp Kohlschreiber on Thursday. The World's No. 1 focussed on his service, with which he had had problems against Paire mostly in the second third set. In front of 11.500 spectators at the GERRY WEBER STADION the Swiss was practicly untouchable in his service in the first set.

As the match went on, he felt for his return more, but wasted too many chances, amoungst others a break chance, against the serve & volley player from "Down Under“. However, he changed gear in the tiebreak. In this discipline he is a force in Halle. The 20times  Grand Slam champion has decided 14 of his last 15 tiebreaks on the grass court in Halle in his favour. And this history of success was to go on against Matthew Ebden. Federer put the bracket around a safe tiebreak, returning brilliantly at the start and end bringing it to 7:2. Thanks to his better service Federer kept up his score: he only gave away four points in the first set. But his aggressive return decided the score.

In the second set the "FedExpress" seemed to really get going, but the World's No. 1 ended up sending his loyal fans through mixed feelings. The Swiss could quickly correct a first break, but Matthew Ebden didn't let loose. Even in spectacular baseline-duels the Australian was at eye level with Federer. With quick and a number of fabulous safety actions he took Federer's serve - now the fans were getting worried. But when it got down to business, the nine-times GERRY WEBER OPEN champion put his foot down and showed all of his class. At 4:5 the the spectators' favourite from Basel got three games in a row, most probably played his best tennis this week and converted his first match point after 88 minutes.

"It was hard work, because Matthew played really well. I had to fight hard to find my rhythm and I didn't get into the match well. I am very happy though, that I played a good tiebreak. In the second set it was a bit up and down and that was highly frustrating. You have to react good and in the end I managed that well", Federer explained after he had reached his 14th Semis at the GERRY WEBER OPEN. 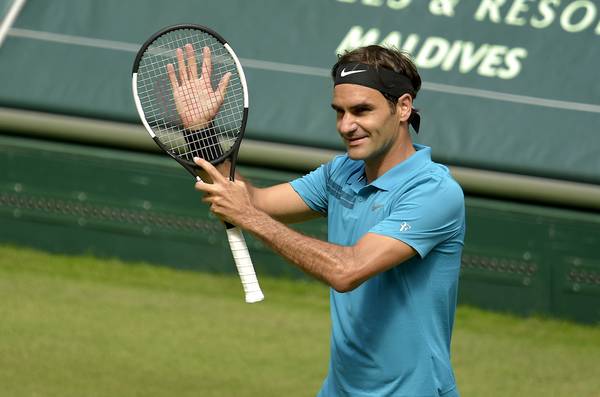 Series is under way: Roger Federer celebrates his 19th victory in series on a grass court against Matthew Ebden. Photo: GERRY WEBER OPEN/KET