This time round the young lion was held back from climbing the throne by an old lion. Florian Mayer, 32 years old and a professional player since 2001, has won the final at the 24th GERRY WEBER OPEN 6:2, 5:7, 6:3 against the just 19 year old Alexander Zverev. At No. 192 in the world's ranking on his comeback trail Mayer has set up a new record as tournament winner in Halle. Never before has there been a winner so far down the rankings. But what do rankings really mean when someone comes along who has been in the quarterfinals of Wimbledon twice (2004 and 2012)? And if it's a young man on the other side feeling the pressure because everyone expects him to have a big career in the future, but he has never been in a final before.

Mayer had shown some big-serving all through the tournament. But in the third game he was already facing the first break point. The man from Bayreuth wasn't much impressed by a foot fault in the first service, though and fended off the break point. Zverev was angry and frustrated. Early on you saw the 19 year-old future hope's racket fly, how return faults were numerous at the beginning. He was obviously having difficulty concentrating because in the sixth game nothing seemed to be going his way and the 32 year-old routined player on the other side of the net took Zverevs service to love. After just 20 minutes the big tournament underdog took the service off the Federer-defeater again - to the astonishment of the spectators the score was already 6:2. Mayers diversified game with lots of slices, variations in speed and unexpected, nearly invading attacks at the net proved to be unmanageable for his young opponent.

But if Alexander Zverev has shown one thing at the 24th GERRY WEBER OPEN this week it was overall that he can increase in a match, can adjust his strategy to his opponents'. And the 1.98 m man from Hamburg got his grips together in the finals, too. He at once took Mayer's serve in the second set, got back into the game with increasing rallies. He seemed to pull positive energie from frustration in the first set - just for a while. He then again lost his patience with Mayer's slice in seemingly endless rallies. A double-fault by Zverev finally brought in a 3:3 for the two-time Wimbledon quarter-finalist. The match was now close, the young gun was never quite satisfied with his performance, he moaned, threw his racket, looked for help towards his box were his father and brother were watching on. At 4:5 Mayer had two match points. Zverev aced mercilessly first. Then a forehand of his opponent landed out. Another ace, which was first challenged, and a little later it was 5:5. The young lion clenched his fist. Now he bit through, cracked Mayer's serve again which meant 6:5 and then tied the sets.

Mayer's numerous forehand-stops dominated the third round, although he said: "They weren't that good today". Again and again Zverev was too late. Nevertheless, it went well for a time but then in the sixth game he lost the thread. The man with the smooth arm took Zverev's service. Then Mayer won his service to love. Zverev still wasn't giving up, got another break point and fended off two further match points at 3:5. He could put nothing more against the fifth match point. After 1:55 hours the winner Florian Mayer went down onto the grass. "This is my biggest win. A 500 point tournament and in Germany and all those great champions before - I cannot really believe it".

It was his second title in his career ever. The first one was in Bucharest in 2011. It was one of the most surprising tournament successes of recent years. He has gone right up the list to around No. 80 in the World's ranking. "This week changes everything for me. Now I can enter the main draws again." Alexander Zverev has gone to No. 28, for the first time amoungst the top 30. And his time is still to come at the  GERRY WEBER OPEN. Mayer said: "Alex, you are only 19, you'll have noumerous moments like the one I have now in your career". And he thanked the audience: "They were wonderful during the week and helped me a lot". The young runner-up said: "Florian deserved to win today, congratulations to him. I just didn't play well today". 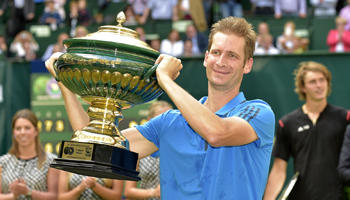 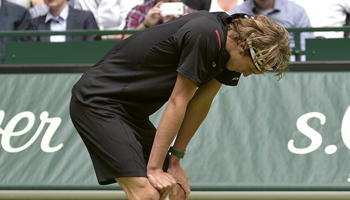 What can I do? Alexander Zverev was desperate because of the many dropshots Mayer used. Photo: GERRY WEBER OPEN / KET 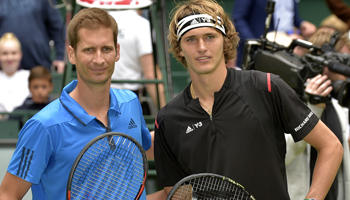