Marcel Granollers and Horacio Zeballos have reached the doubles-final for the first time at the TERRA WORTMANN OPEN. The Spanish-Argentine duo beat the opponents from Croatia and the USA, Ivan Dodig and Austin Krajicek by the tightest tennis score possible. The score in the end was 7:6, 6:7 and 10:8 in the match tiebreak.

Dodig/Krajicek got to a better start, and could go into the lead in the first set 4:1. Granollers/Zeballos, however, number one-seeded in Halle, came back. The partners, who had won the title six times on the Tour already, won the tiebreak 8:6. The second round was quite unspectacular, if you measure a match by breaks. There were no breaks, but world-class doubles tennis instead. The semi-finals encounter on the Tennis-Point Court should have had more spectators, but then there was quite a competition in the OWL ARENA with the World’s No. 1., Daniil Medvedev, playing at the same time. Dodig/Krajicek got the tiebreak in the second set 7:4 (1:4).

The decider fell in the match tiebreak, which first went to rule; all players brought their service through. At 6:5 Granollers/Zeballos got a so-called mini-Break and rushed off to 9:6; three match points. The third was converted to 10:8, which means they have won their place in the finals.
Granollers/Zeballos will now play the winners of the match from Saturday, Tim Pütz/Michael Venus against Marcelo Arevalo/Jean-Julien Rojer, on Sunday. 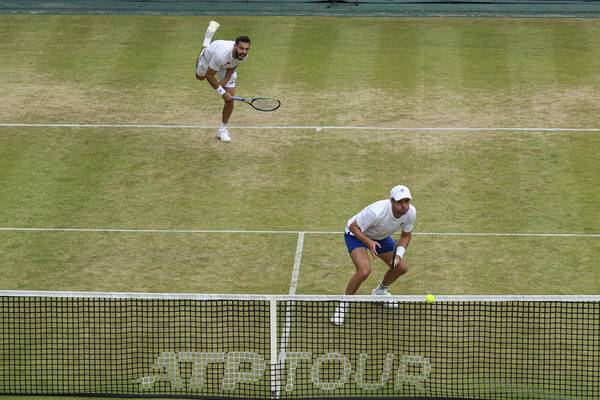