Hurkacz Sweeps No. 1 off the Court

Hubert Hurkacz has won the 29. TERRA WORTMANN OPEN in one of the shortest finals of the tournament’s history ever. The perfectly playing Polish player swept the World No. 1, Daniil Medvedev, of the Court 6:1; 6:4 in just 63 minutes. The 25-year-old from Wroclaw should thus be amongst the favourites to win Wimbledon.

Yes, Hurkaczs game is better adapted to grass than Medvedev‘s. Yes, the only match between the two on grass was won by the Polish player. And yes, Medvedev had not yet reached his top form during the tournament. Even though, nobody had expected such a rebuff in front of 11.000 spectators. Hubert Hurkacz played as if in trance from the first right until the last point.

His tactics were sophisticated; playing many a short pass, which didn’t amuse the US-Open-winner of 2021, who stood well back behind the baseline. And when serving, he was untouchable by his elemental power. There was no break point for Medvedev. “My service was exactly how I imagined it to be like”, the Polish player said after the match. ”I got the momentum early and just carried on”.

With this he meant the fast break in the first set to 2:0. Then 3:0, then 4:0. The man from Moscow on the other side ranted, held discussions with his box, shook his head as if saying “what am I supposed to do against this“? It was 5:0 after 19 minutes. But the best player of the last 52 weeks wasn’t going to beaten off the court to love. He got his service through with a good volley to make it 1:5. Was there still hope? Not really because Hurkacz just kept going and thus making the score 6:1.

Surprisingly, even the long rallies on the baseline were nearly all won by the Polish player. Medvedev didn’t find his rhythm. Hurkacz was able to read his opponent’s service well, was on point. Medvedev’s first service game in the second set went quickly making it 0:40. He fought, but in the end, he lost his service. That was the preliminary decision. Hubert Hurkacz served through and even had time for a stop-lob-game, just like Oscar Otte had celebrated against Medvedev in the semi-finals.  At 5:3 the Wimbledon semi-finalist of 2021 had his first match point. The number one was able to fend off this one. At 5:4, the third match point meant the end, making the score 6:1, 6:4.

Hurkacz keeps up his final series; he has won all of his five final participations in his career so far. ”And it is so good to play in front of this great audience”, he said and waved to the spectators at the OWL Arena. Daniil Medvedev, however, has not won one of his four finals since the US Open. He lost in s’Hertogenbosch to the outsider Tim van Rijthoven last week. ”I’m sorry for the audience that I couldn’t make it a more exciting match today. You even supported me against a German player here on Saturday. Thanks for that. I’ll be back“.  The favourite without a real chance was able to smile again a little later, when awarding the ball kids with their remembrance medals at the 29. TERRA WORTMANN OPEN together with his opponent. 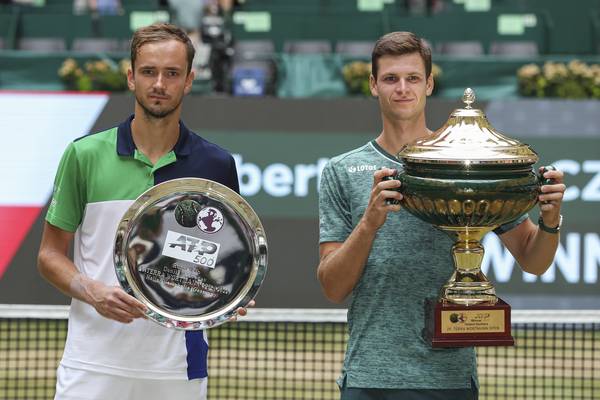