Hurkacz is the king of tie break

The Polish player beats Auger-Aliassime, without even having a single break point

When a La-Ola-Wave goes round the OWL Arena of Halle and you hear fans chanting, then there must be something special going on the Centre Court. And there was something special going on; Hubert Hurkacz and Felix Auger-Aliassime showed great tennis on the grass at the 29. TERRA WORTMANN OPEN. In a match with only one chance to break, the man with the better nerves was triumphant in the end - Hubert Hurkacz. He won 7:6(2), 7:6(4) and now challenges Nick Kyrgios in the semi-finals.

Sometimes tennis is a cruel sport; The Canadian Auger-Aliassime was the more dangerous return player in this quarterfinals. In the seventh game of the first set he had the only break chance, in the second he got at least a 0:30. His opponent, who had not got even one break point, however, snatched the victory. “He served unbelievably well, I just tried to hang on”, Hurkacz admitted after the match. The super talented player from Canada served a total of 21 aces.

Hurkacz, modestly, forget to mention that he had offered a great performance, too – including two spectacular “Becker-Dives” right by the net. In both tiebreaks he took over the lead quickly, sometimes with a soft volley, sometimes with a tough forehand.  And Auger-Aliassime, of all things, made more mistakes than usual in the tiebreaks.

It is not surprising that the number five-seeded from Wrosclaw has got through to the semi-finals; he was in the semi-finals in Wimbledon last year beating Roger Federer in three sets on his way there. This year he has been waiting for his participation in a finals match so far. At the TERRA WORTMANN OPEN there is only one more step to take. In his way stands the unpredictable man with the exciting playing style: Nick Kyrgios. It is their first encounter. And we can expect a game dominated by strong serves. 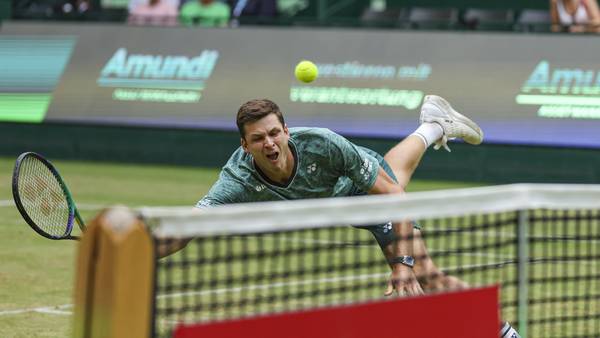