The German surprises the favourite with a powerful performance and an exceptional strategy.

That’s life: You get the honour to draw the main field at your home tournament, and then – Jan Lennard Struff had drawn the No.1-seeded player as an opponent. None other than Daniil Medvedev from Russia, the reigning ATP-World Champion and world’s No.2. Who had beaten him so easily several times. And that’s life, too: Struff won against the favourite just like that in two sets 7:6(6), 6:3.

Fear for great names is not „Stuffi’s “, Germany’s no. 2, thing. He doesn’t have to fear them, either. He just missed his first tour title in Munich a couple of weeks ago, at the French Open he defeated No. 7 of the world, Andrey Rublev. Only in the round of 16 he was stopped by Diego Schwartzmann. And Struff, who comes from the mountain region “Sauerland “, is quite a local hero in Halle. The 31-year-old has played tennis “Bundesliga” here, and has often trained on the grounds around the OWL-Arena.

Both players played fast from the baseline, Struff varied play later, played classic serve-and-volley. It paid off. Medvedev went into the lead 3:1 at first, but the German broke just in time as the Russian was serving and made two double faults. At 5:6 Struff fended a set point off, as his volley only just went over the net. "That was luck, I just hit it with the frame" he said. In the tiebreak, however, he was always in the lead, lost his first set point at 6:5. At 7:6 he did better. Medvedev was seething after losing the set.

Grass is not the Russian’s favourite surface. His carrier balance stands 18:12. The 25-year-old hasn’t yet got further than the third round in Wimbledon. Closing time in the first round this time, already, in Halle, because Medvedev wasn’t able to get to grip with his nerves. He ranted, swore, smashed his racket.

And Jan-Lennard Struff? He quietly followed his path and concentrated. "I didn't want to show any weakness." An early break in the second set (3:1), rebuffed break points and shortly afterward the second break (5:1). "To be honest: I was thinking of my first set against Schwartzmann in Paris. There I also had a 5:1-lead and lost the set" the German revealed after the match. But he hesitated just for a moment. Last resistance by the favourite didn’t really make a difference anymore, then. This victory was “Struffi’s”.

Philipp Kohlschreiber, winner at Halle in 2011, has reached the round of 16, too. The routineer defeated Austrian Jurij Rodionov 6:4, 6:3. He now meets Corentin Moutet from France. 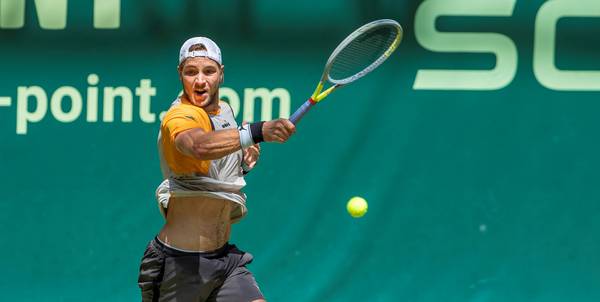 Jan-Lennard Struff played one of the best matches of his year 2021 at the NOVENTI OPEN. PHOTO: NOVENTI OPEN/Mathias Schulz (free of charge) 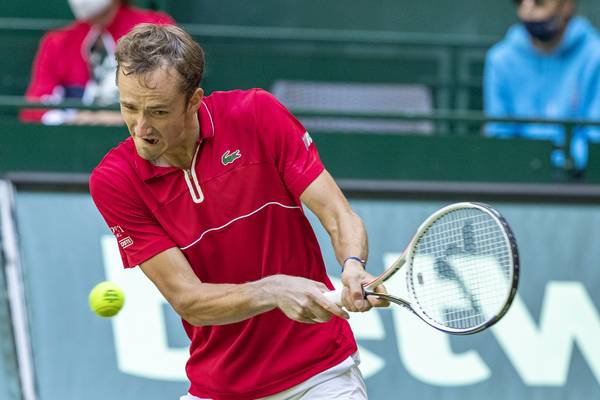