Kevin Krawietz/Horia Tecau take the part of the Top Favourites

In the doubles competition the seeded players are having a hard time, too at the NOVENTI OPEN. The top-seeded pairs Ivan Dodig/Filip Polasek (Croatia/Slovakia) and Lukasz Kubot/Edouard Roger-Vasselin (Poland/France) had to give in early.  Kevin Krawietz and Horia Tecau (Romania), seeded at number three, are now favourites.

The German-Romanian duo has reached the semis as expected. After first defeating Tomislav Brkic/Nikola Cacic (Bosnia/Serbia) 7:6(3), 6:3, they also won against Argentian Andres Molteni and Guido Pella in straight sets 6:4, 6:2. In the second last round they will now meet Belgians Sander Gille and Joran Vliegen, No. 6 on the list. The Belgians were able to beat Rohan Bopanna and Divij Sharan from India in the last doubles match on Thursday 6:3, 7:6(3).

The two others to go through to the semi finals have to yet be defined. Tim Puetz and his partner from New Zealand Michael Venus are in fifth position and will be challenged by the US-Americans  Austin Krajicek and Sam Querrey. These had won beforehand to the no. 1-seeded Ivan Dodig and Filip Polasek 5:7, 6:1, 10:6. The duo Puetz/Venus went through to the quarter final by beating the Germans Yannick Hanfmann/Dominik Koepfer 7:6(2), 6:2.

Felix Auger-Aliassime (Canada) and Lloyd Harris (South Africa) are playing both in the singles and the doubles competitions. But at least one of the two will have to retire after the quarter final of the doubles competition, because they are now opponents. Felix Auger-Aliassime and his Polish partner Hubert Hurkacz had before defeated the no. 4-seeded Wesley Koolhof/Jean-Julien Rojer from the Netherlands  7:6(5), 6:3. Lloyd Harris and Jonathan Erlich from Israel reached the round of the last eight by a clear victory -  6:3, 6:3 - over no. 8-seeded Oliver Marach (Austria) and  Aisam-Ul-Haq Qureshi (Pakistan). 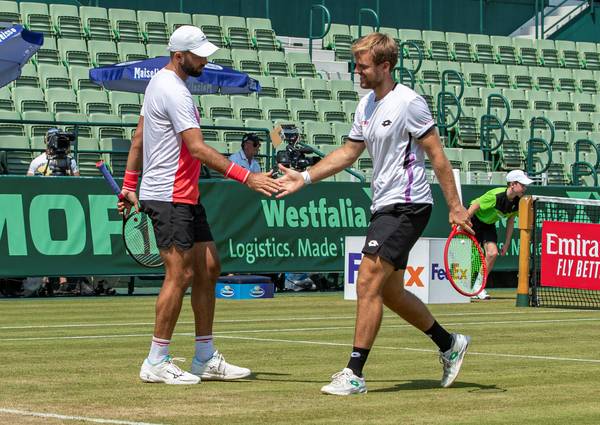