US-pair get to the finals after a nail-biter

Doubles-finals take place without the Bryan-Brothers at the GERRY WEBER OPEN 2016. The brothers from the United States fail in the semis against compatriots  Klasen/Rajeev Ram 4:6, 6:7 (2).

Because Philipp Kohlschreiber couldn’t play his quarter-final match against Dominic Thiem due to injury, the tournament organizers at the 24th GERRY WEBER OPEN reacted quickly and relocated the first doubles semi-finals under the roofed Centre Court

A decision which the over 10.000 spectators well much appreciated, as they got to see an absolutely world-class doubles. It was the first performance for the Bryan-Brothers on the Centre Court in Halle – and it was against two very top-class opponents. In a diversified and high-class match it was quickly clear to see that it was going to be small things that count. Klasen/Ram played the somewhat more aggressive returns – so not surprisingly the break came at 4:6 in the first round.

Toward the end of the second set it was a real nail-biter. The Bryans had their first break of the whole match primarily, Klaasen/Ram then fended off the set-equal with a spectacular decision point and instead got to the tie-break.  It was there that Klaasen/Ram really meant business and the brothers from Camarillo went to rack and ruin. After 75 minutes Rajeev Ram targeted the match-point to win 7:6(2) with a cracking thunderbolt shot.

“It was a great match. We were very pleased today to play on the Centre Court. It was a fantastic atmosphere. We played the best ever doubles and won. That’s awesome“, Raven Klaasen was happy after the match. 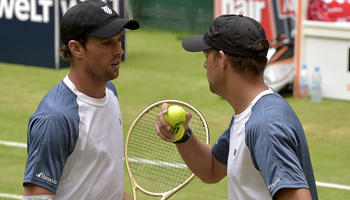