A new king is crowned at the NOVENTI OPEN. Title holder Roger Federer lost surprisingly at the 28th Tournament in the round of 16 to an overwhelming prince. The 20-year-old Canadian Felix Auger-Aliassime defeated the 39-year-old Maestro 4:6, 6:3, 6:2. During the match he played as dominantly as his opponent had in the past.

“Finally”, Auger had said the previous day when it was clear that he would play Federer for the first time in a tournament. Up until now, they only knew each other from training. “And then on grass,“ the Canadian said. On grass – that is where Federer is the best player in history. 8-times champion in Wimbledon, 10 times in Halle. But the talent from North America, the No. 21 in the world, came to Eastern Westphalia with the confidence of getting to the finals at Stuttgart the previous week. And thus, had already got a lot of practice on the green surface. Federer, on the other hand, had only played one match in the first round against Ilya Ivashka at the NOVENTI OPEN.

But the lack of practice was not to be seen much on the Swiss’ side in the beginning. Both actors played grasscourt tennis – real grasscourt tennis with strong serves, returns, short rallies and often passing at the net.  And they played brilliantly at times. In the sixth game the younger of the two had the first chances to break, but the older parried this first attack with, amongst others, an ace.  Promptly, the routineer came in with a great forehand longline, then a backhand down the line and Auger-Alissime lost his service. Federer clenched his fist.

But it was tight when he served the set. Again, it was 15:40 against him, but he stood firm, for instance in a furious rally in which the Canadian had the chance. Federer closed the first round with a good volley 6:4. "I could have got more in this first set" Auger-Aliassime said later: "These two passingshots by Roger - there you can feel what kind of  top player he is."

But the prince got stronger against the king, who started struggling with his faulty backhand. The only deficit on Auger-Alissime’s side: processing his chances. In the end, it was his ninth break point in the match he finally used to make it 4:2 in the second set. From now on the Canadian did magic, while Federer’s game fell apart. "But you have to stay focused until the end against guys like him. I thought about that at 4-0 in the last set" said the Canadian.

Overall Auger-Aliassimes merciless serves and his forehand – as swift as an arrow - were unsolvable tasks for the titleholder. The newcomer hit eight aces in four service games of the third set. Two breaks were quickly done, Federer had nothing to set against that. After 1:44 hours Felix Auger-Aliassime used the first match point. "That was a great win for me and I am happy", the winner said. "Almost everything went well today: service, return, my game at the net. Just everything." But he didn't want wo get too euphoric: "At first, I have to play my quarterfinal on Friday. When I shall be in the final and win there again, then I will really be happy. Maybe I'll drink some champagne." If he goes on playing in this form in Halle, he could, without more ado, hold the cup in his hands on Sunday.

Roger Federer, on the other hand, left the court sadly. It was his earliest loss in Halle ever. "It went up and down in my game today, that's the way when you do a comeback" he said. "Felix was the better player today and would have won anyway, I think." Now, the grasscourt king returns to Switzerland and will prepare for Wimbledon. "I know what I have to do now." 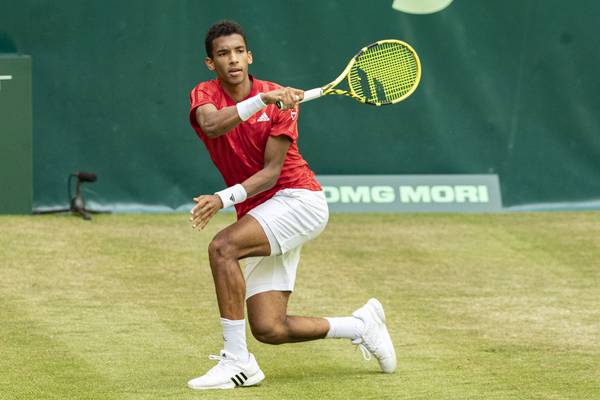 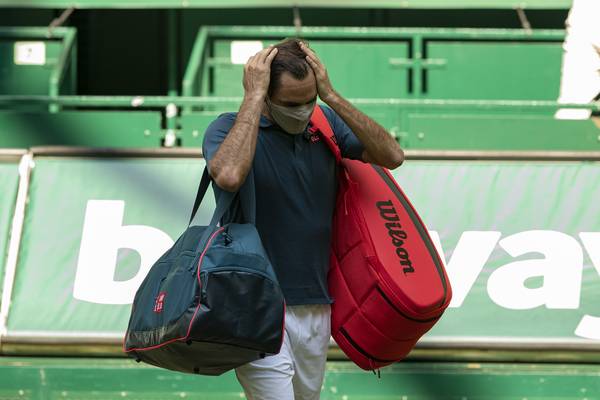 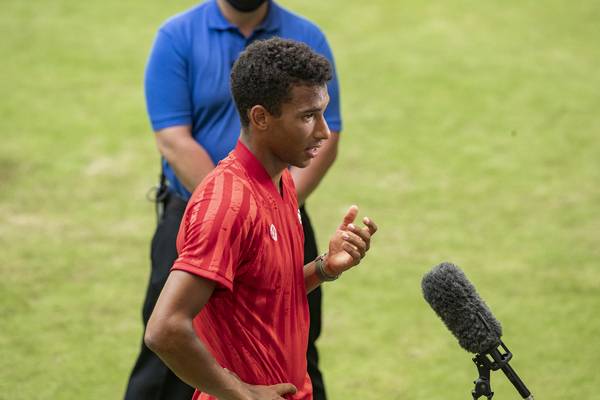 Felix Auger-Aliassime was so happy after his big win against the grasscourt king. FOTO: NOVENTI OPEN/Mathias Schulz