What a battle! Newcomer Sebastian Korda (USA) and experienced Japanese Kei Nishikori fought hard in the scorching heat on the Centre Court at the OWL-Arena for 160 minutes. Youth won at the 28. NOVCENTI OPEN 2:6, 6:3, 7:5 in the end.

Experience against youth: That was clear before the match started. Because the 31-year-old Japanese had watched the US-American with Czech roots growing up for a time.  Father Petr brought his son to training sessions often, back in the days he trained Radek Stepanek. Kei Nishikori already met his opponent as a child. “I’m surprised how far he has got. I didn’t anticipate that” the Japanese super star said. Both live in Bradenton in Florida. Sebastian Korda was even born there.

The match, indeed, was more like a festival of faults. Perhaps due to the heat in Halle. Nishikori and Korda kept on speeding up the pace of their many duels from the baseline until one of them made a mistake. The 20-year-old American made more mistakes in the first set, lost his serve in the third and fifth game. The Japanese player seemed to be in control. After Korda fell and had to be treated, it didn’t at all look like a victory for the talent. But he improved in the second set, while Nishikori’s game decreased. One break was enough to make it 4:2 and later 6:3.

The Japanese had the first break chances in the third set, wasn’t able to use them, though. The journey of the two evidently exhausted players went in the direction of a tiebreak, but in the eleventh game the blond giant suddenly was able to take his opponent’s service. It wasn’t over yet, because after two wasted match points Nishikori again had the chance to rebreak. Kordas Ace came at a perfect time. Just moments later his arms went up triumphantly.

Sebastian and Petr Korda are the third father-son duo in the history of the ATP to both be triumphant in a tournament. Korda Junior in Parma just a couple of weeks ago. Father Petr was one of the best players of the 1990s, winning the Australian Open, and being in the finals at Halle in 1997. Will the son get the next cup in his family’s history?

For Kei Nishikori, former No. 4 in the world and finalist at the US Open 2014, he is still on his way to finding his old form. He reached the round of 16 in Paris last week and was then defeated quite clearly by Alexander Zverev. "I didn't play badly at all", he said after his defeat in Halle: "In the third set either of us could have won, we had our chances. But he deserves the victory." 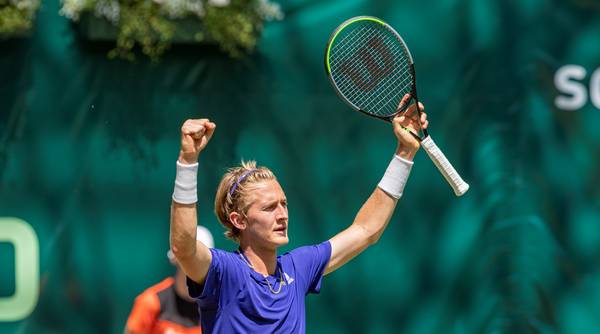 Sebastian Korda walks on the tracks of his father Petr in Halle, who was runner-up in 1997. FOTO: NOVENTI OPEN/Mathias Schulz 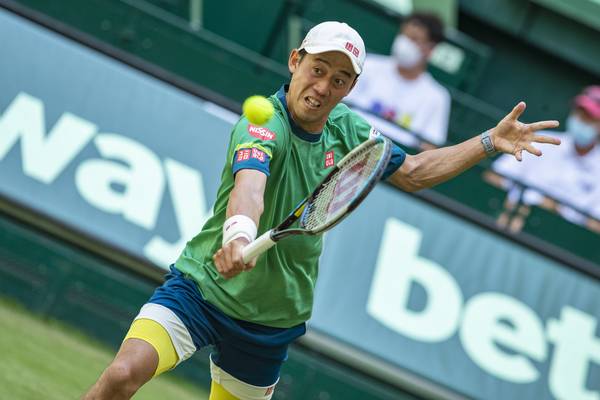