Speedy Medvedev through to the Round of 16

Goffin has no chance against the World No 1 at the 29. TERRA WORTMANN OPEN

The World No 1 Daniil Medvedev sets course for his first triumph in Halle. In just over an hour the 26-year-old defeated Belgian player David Goffin 6:3 and 6:2. It was Medvedev’s first victory in Halle, after he had lost his debut match against Jan-Lennard Struff in the first round last year. “That was an important win", Medvedev said. “I am happy to have got to a good start into the tournament”.

David Goffin, however, has experienced much better matches on the Centre Court at the OWL ARENA. As the 31-year-old, currently at ATP-rankings number 39, was in the finals at Halle in 2019. Back then he lost against Roger Federer. He was without a real chance of winning against Medvedev. With powerful baseline game, great passing shots, and also with a bit of luck from the net twice the man from Moscow pulled away bit by bit. In the first set Medvedev got a break to make it 3:1, he converted the second set point just a little later to make it 6:3. The second round was to be a clear matter. Two early breaks meant a lead of 4:0 for the lead tennis player, which he brought home without a problem. With the second match point came the 6:2 and thus the entry to the round of 16. His opponent on Thursday will be Ilya Ivashka, against whom he had already won 7:6, 6:4  in s‘-Hertogenbosch in the quarterfinals.

Medvedev is currently playing his second tournament as the number one. At his first performance as the World’s No 1 in Indian Wells in March, he won against Tomas Machac, after that the man from Moskow was defeated by Gael Monfils.  He wants to do better in Halle. The start has gone well, but now Medvedev wants more. 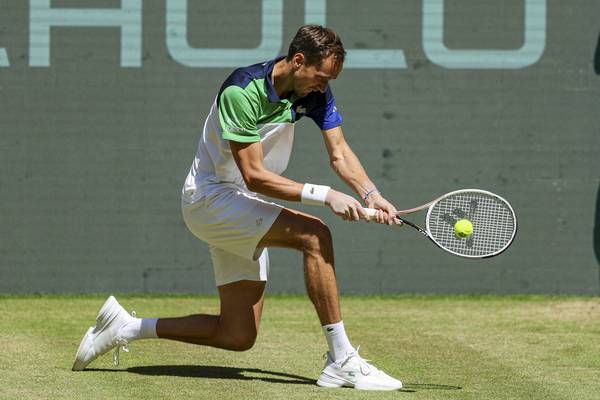 In two straight sets to the round of 16: Daniil Medvedev, World No.1. Photo: TERRA WORTMAN OPEN/Mathias Schulz