Tim Puetz and Michael Venus are through to a doubles finals on grass for the second time in a week.
The German-New Zealand combination beat Marcel Arevalo (El Salvador) and Jean-Julien Rojer (Netherlands) more clearly than anticipated in straight sets 6:3; 6:4 in the semi-finals at the 29. TERRA WORTMANN OPEN.

But it wasn’t as clear as it looks. Puetz/Venus was the more effective doubles team. They converted a break chance in each of the sets, while the French-Open winners of 2022 left their possibilities to break unused by the dozen. Rojor, the oldest player in the match at 40, slipped up in the first set at 4:3 for Puetz/Venus. In the following match Arevalo and Rojer hat the chance to fight back four times, but the 34-year-old Puetz got the match win with a volley. In round two it was again Rojer, who lost his service. This time 1:2. Puetz and Venus, who had won in Dubai this year and in Stuttgart had lost the final, brought their service games through quite solidly; they converted the second match point to 6:4. Now they will play for the trophy for the first time in Halle.

Puetz/Venus will now meet Marcel Gronollers and Horacio Zebellos in the finals at the TERRA WORTMANN OPEN, on the Centre Court of the OWL Arena, on Sunday at 12.00 h CEST. The Spanish-Argentine duo is the number one-seeded team in Halle and they have won six titles in total on the Tour.

Granollers/Zeballos got to the semi-finals at the French Open this year, Halle will be the first finals match for the two. The successors for Kevin Krawietz and Horia Tecau are sought on Sunday. They had won the title against Felix Auger-Aliassime/Hubert Hurkacz in 2021. The doubles record title-holder is Raven Klaasen. The South-African won 2015 and 2016 together with Rajeev Ram und 2019 together with Michael Venus. 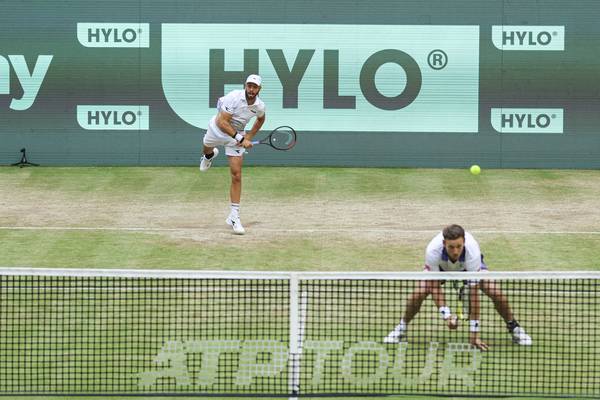