That was impressing! Roger Federer gets through to the finals at the 25th GERRY WEBER OPEN by performing admirably. Against defending champion Florian Mayer Federer kept everything under control for the eighth time in the eighth match and won triumphantly 6:3, 6:4.

After the victory over Mischa Zverev Roger Federer had already stated to "having to play very aggressively from the start" against Florian Mayer - and that is exactly what the Maestro did. At the sold-out GERRY WEBER STADION the Swiss player made it perfectly clear from the start, who the eight-times GWO-Champion was. Especially when returning Federer went the whole hog, didn't leave Mayer even time to breath and took the Germans' second Service. But the man from Bayreuth did try to play aggressively, too. The result was a highly attractive game of lawn-tennis with lots of variations in play in the first set. With all the battle spirit Mayer could only limitate the damage. With a perfect service game (three aces and one volley) the world's no. three ended the first set (6:3) after 32 minutes.

But Mayer still believed in having his chances, put in his spectacular, flying backhand, missed two break chances though at the beginning of the second set. Federer and Mayer entertained the fans with strong serves, well prepared net-attacks and precise passing shots - but when it came down to business, Federer made the important points. Mayer served up a break chance for Federer in the fifth game by a double-fault - and he grabbed the chance without thinking twice. Even though Florian Mayer didn't really stand a chance he played a strong game and presented himself in the form that had surprisingly got him the title at the GERRY WEBER OPEN. This wasn't enough to get another sensation against the "lawn-king Roger", though. Federer showed an even more improved performance than in the first two matches at the 25th GERRY WEBER OPEN, probably wasn't quite happy with the exploitation of his chances. Of overall twelve break chances the Australian Open Champion only used two - but then he was a class of his own when serving. Exactly 66 minutes had been played when Federer brought his third match point home - the 11,500 spectators cheering him on. Federer, playing the GERRY WEBER OPEN for the 15th time, is thereby through to the Semis for the 13th time.

"I felt good with my serves. That is the main thing on grass. Florian, too, had his chances, at the start of the second set, especially. I would have wished for effectivness, but it was fun playing Flo. It was a high-level match. That is of course good for us, and also for the audience", Roger Federer stated after his solid two-set-win. In the Semifinals awaits a real premiere: The Swiss will play against the Russian "NextGen"-star Karen Khachanov for the first time. 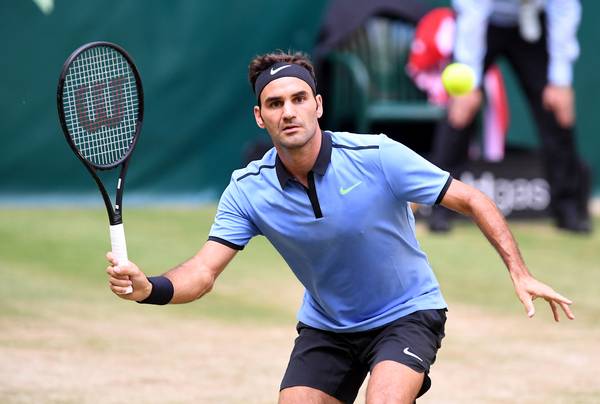