The most spectacular ball of the match was achieved by the 20-year-old Sebastian Korda. After the at number six-seeded Roberto Bautista Agut had seemed to overcome him with a lob, he played the ball back onto the field hitting it between his legs. And all in all, the young man with the familiar name played briskly and was able to catch the number 10 of world rankings out rather inconveniently. In the end Sebastian Korda won 6:3, 7:6(0) and was the big first surprise at the NOVENTI OPEN.

Petr Korda, Father of Sebastian, reached the final of the grass event in Halle in 1997. Only Yegeny Kafelnikov was able to stop the Czech back then.  Sebastian was born in Florida in July of 2000. Now he wants to step into his father’s shoes. From the begin onwards, Roberto Bautista Agut got to feel that. Sebastian Korda started like a fire brigade, got a break at once. And, even if the 20-year-old with an US passport lost his service, too, he kept his head up high and won the first set after 38 minutes 6:3.

In the second round of the match, too, he got a break straight away. Roberto Bautista Agut was not able to find his rhythm due to his opponent’s fast game. Again, and again, he made easy mistakes. But, at least, he was able to level the match, he also achieved a break to make it 3:3. Because both players now brought through their services, it went into a tiebreak. In this, Sebastian Korda was able to triumph once again, didn’t let his opponent score one point and ended the match with the first match point 6:3, 7:6(0). 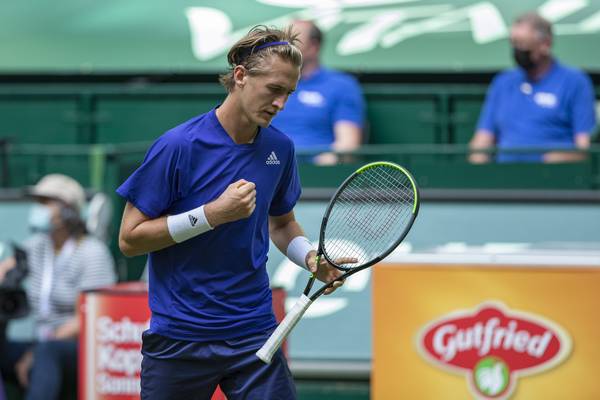