In his best years he was named the Fed-Express, often defeating his opponents so quickly. This year this was hardly noticed up till now. But only up until now - the quarter-finals of this years’ GERRY WEBER OPEN. Roger Federer needed just 20 minutes to complete the first set against the Belgian David Goffin. And he isn’t just anybody either; after all, he is the World’s No. 11.

It was one of those phases in which it seemed that the Suiss super star was in a tunnel, as if he were to see his opponents shots in slow motion and it was as if everything he tried went just his way. First of all there was a festival of breaks: four of the first five service-games were lost, but Federer got three of the four breaks. Then he was that quick, the spectators could hardly keep up counting. The score was 6:1 for the eight-time winner at the GERRY WEBER OPEN. The Belgian had only grabbed ten points then, the rallies were just too quick for him.

"Let's go Roger" the audience chanted at the beginning of the second set. But at the high age, for tennis, of 34, the Fed-Express-phases aren’t kept up as easily long as in previous times. The maestro, dressed all in blue, weakened, lost his serve twice and Goffin was serving for the set at 5:4. A fight at all costs began. Federer came back, equalled and got his first match-points. Then the tie-break came. This time, Goffin was in the lead, but lost a couple of set-points; then set- and match-points took turns. The 22nd point meant the audiences’ favourite had finally done it again, winning 6:1, 7:6 (12:10).

For 16 times now he has not been beaten on the grass at Halle. Tommy Haas was the last to be triumphant and win against him in the finals of 2012. The next player to try is Germany’s big hope Alexander Zverev, who plays him in the semi-finals on Saturday. Zverev was occupied with a press conference and interviews after winning his quarter-finals, so he missed Federer’s performance in the first round. But perhaps that was quite good for him. In Rome, at their first match, Federer won in two sets. 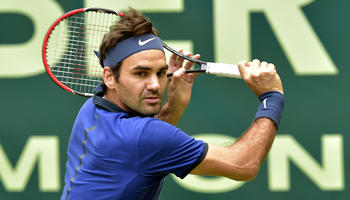 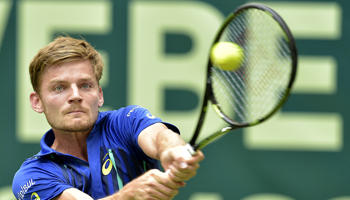