Title-Holder Humbert fights to reach the Second Round

This match was not for the faint-hearted. Title-holder Ugo Humbert only just got past dropping out of the first round at the 29. TERRA WORTMANN OPEN and therefore can dream on about a second victory in Halle. At the 6:7, 7:6 and 7:5-succes against qualifier Radu Albot from the Republic Moldova the 23-year-old Frenchman fended off a match point in the second set and thus got a tiebreak. In the end a break decided the game. ”That was a very difficult match”, Humbert said. “My goal was to defend my title”. We’ll see how far this will carry him this week. He now plays the winner of the match Hubert Hurkacz (POL/5) vs. qualifier Maxime Cressy (USA), which will take place on the Tennis-Point Court, second match, on Tuesday.

Humbert, currently World No. 50, has not been able to celebrate the really big victories since Halle a year ago; due to various reasons. In 2022 his balance stands at five victories to 13 defeats. Only three times he reached round two in an ATP-tournament. But in Halle his balance is still without a flaw: 6:0 is on the board.

The first round was a thing of the servers, as was the whole match really. Only Albot (ATP 116) had to fend off four break points at a score of 2:3, but otherwise the games went more or less smoothly. Humbert made too many mistakes in the tiebreak, with the decider and thus the set won by Albot 7:4, who had prevailed against Portuguese Joao Sousa and Swiss Dominic Stricker in the qualifying.  The second set was a reflection of the first. This time Humbert won in the tiebreak 7:4. At 6:5, however, there was the mentioned match point for Albot, the 32-year-old Moldovan. The third round was another festival of servers, up to 6:5 for Humbert. For the first time in the whole of the match one of the players lost his service, in this case Albot, the title-holder used the third match point to win and to get through to the round of 16. 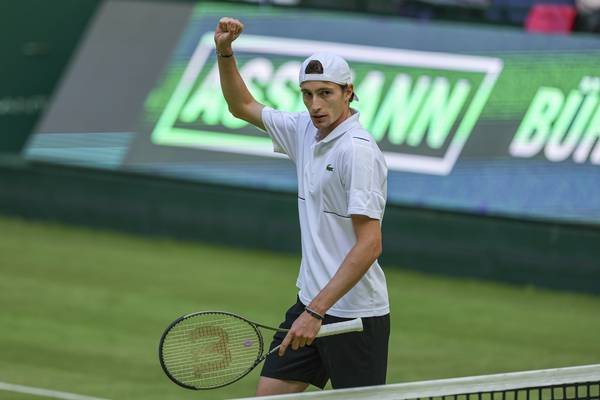