Definately not many had counted on this years‘ winner at the 28. NOVENTI OPEN. But he is one of those players to reach the absolute top of the world in the coming years: Ugo Humbert, from France, 22-years-old and victorious over the world’s no. 7 6:3, 7:6 (4) in the final.

Humberts‘ big idole is Roger Federer. He was nearly just as young when he won on the grass at Halle for the first time. Nine wins followed suit. An omen? Well, comparing him to the best grass-player of all time would put a little too much pressure on the man from Metz. But the left-handed player knows his strengths on the green surface, as he had said in the duration of the tournament week.

The list of players he defeated at the 28. NOVENTI OPEN speaks for itself: next to Germany’s No. 1 Alexander Zverev, Felix Auger-Aliassime, too, who himself had taken record champion Federer out of the tournament. And in the final game, too, Ugo Humbert showed what made him so strong. A combination of many building blocks.

Humbert has not only a win-bringing shot, he is somewhat of a Counterpuncher. One knows this from boxing, which btw his opponent Rublev does as a hobby. At the OWL-Arena the Russian stood opposite one of those. Humbert often knows the better answers to the game openings of his opponents. He is extremely mobile and can hardly be outplayed, serves and returns highly precisely and has nerves of steel in the important moments. His parents run a butcher’s shop (fun fact, btw, in German butcher’s is `Metzgerei´and he comes from Metz) and their son is a champion in cutting up his opponents stratergy. And is also able to surprise with his variabled game.

The scanning was just over in the first set, when such a moment had come. In the eight game Rublev faced two break points. Losing his serve due to a backhand fault. But Andrey Rublev isn’t just anybody, he is an eight-times tournament winner and top ten player. He put on pressure straight away, had two chances to break in the next game. But wasn’t able to use them. 6:3 it was after just 36 minutes. Rublev ranted about some shots from the Frenchman, while going back to his bench.

The final was not so high-class as the matches Zverev against Humbert and Federer against Auger-Aliassime. But the level increased in the second set because Rublev also found back to his playing style and this style is called power.  Serve and forehand brought him safely into the tiebreak. Tiebreak? Remember. Exactly: Humbert had already played five this week at Halle, winning four. And he won this one, too. A fatal forehand fault by Rublev brought on a mini break to 5:4. The man from Moscow shouted out his frustration, but pushed himself again – in vain. Service from Humbert once again and another one of Huberts forehands along the baseline and it was over and done with: 7:4. Ugo Humbert dropped down on the grass and enjoyed his moment of triumph.

He has contested in three finals on the ATP-Tour so far and has won all of them. He will climb to No. 25 in the world rankings. As high as never before in his career. 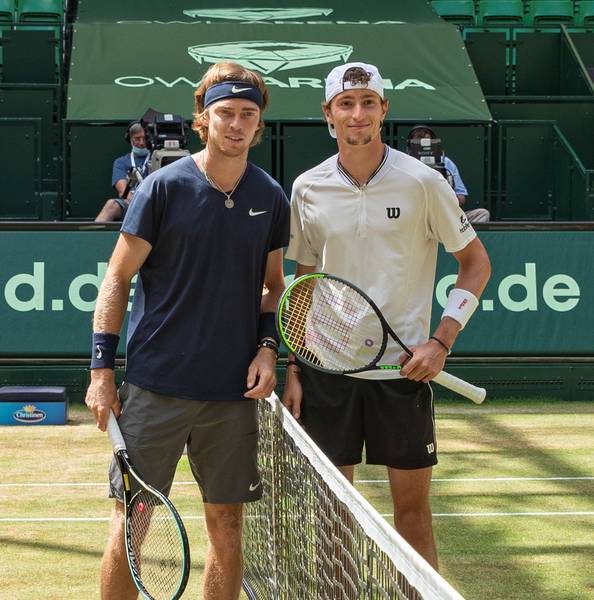